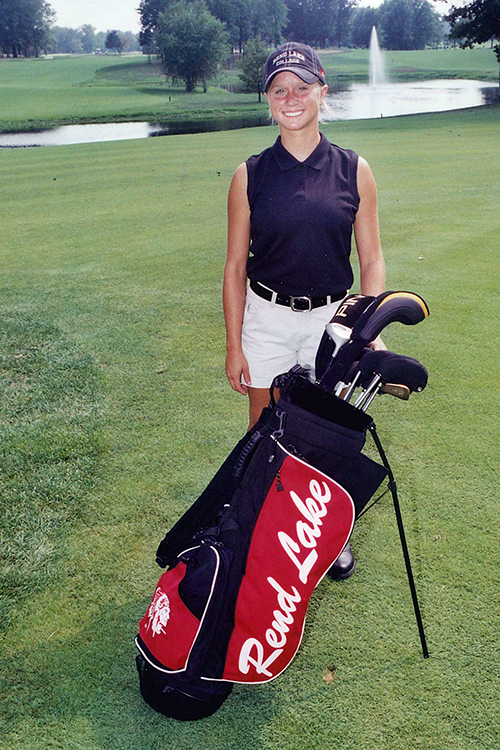 INA, Ill. (March 29, 2017) – Danielle Kaufman would have every right, it would seem, to wonder just how good she might have been while competing on two healthy legs during her time as a member of the Rend Lake College Women’s Golf Team from 2003-05.

But there really is no need for that.

The Nashville product, despite dealing with severe leg issues, was one of the best to ever play for the Lady Warriors; witness her inclusion in a small Class of 2017 to be inducted April 22 into the RLC Sports Hall of Fame.

The Region XXIV Medalist, Third-Team All-America honoree and only the second player (at the time) to record a hole-in-one in the National Junior College Athletic Association (NJCAA) Championships will be saluted along with former Warrior Baseball Coach Rich Campbell (1992-2001), who did something no other diamond mentor has done in 50 years by guiding his charges to two Region titles; and the record-setting 1983-84 Men’s Basketball Team, which left behind nine new standards following a 25-7 campaign.

A “Goose” (Kaufman), “Soup” (the obvious, Campbell) and Team Chemistry all packaged into one neat bundle and Hall-of-Fame-bound. Game time on Saturday, April 22 for the 18th Induction Ceremonies will be 5:30 p.m. in James “Hummer” Waugh Gymnasium.

Results from Kaufman’s freshman season would not reflect a player who had to overcome the course she was playing, her opponents and Compartment Syndrome.

She helped set Lady Warrior 18- and 36-hole records with a 320-316–636 as her team placed ninth against 22 four-year opponents in the Illinois Wesleyan Invitational at Ironwood Golf Club in Normal, placed 30 spots ahead of her nearest teammate in 16th at the 17-team Ball State University Classic and finished 18th individually with her 86 in the nine-team Western Illinois University Classic leading up to the 2003 Region XXIV Tournament.

All she did in the main event each fall to determine spring NJCAA finalists was lead the Region XXIV Tournament field. Kaufman’s 163 (81-82) was five better than the runner-up, South African teammate Mia van Rooyen at 168 (87-81), and eight ahead of the 171 (87-84) by third-place teammate Carrie Paul, who was All-Tournament as a freshman in the NJCAA Finals.

The 1-2-3 sweep enabled Coach Cindy Corn’s squad to claim its first crown in three years by 36 strokes over defending champ John A. Logan with rounds of 683 (339-344) at Franklin County Country Club.

In the spring, Kaufman was medalist and classmate Casey Biddinger was runner-up as the RLC gals warmed up for Nationals by winning the McKendree College Invitational. Biddinger heated up even more in St. Croix, Virgin Islands, as part of one of the most unique threesomes in the history of golf; after her two partners aced the same hole, Biddinger joined the crowd with a hole-in-one of her own later in the round.

Just for good measure during the season, Kaufman played from the Gold Tees (5,922 yards) and set the Rend Lake Golf Course Women’s Record at 68.

Off-season surgery followed. Kaufman did not have to ride in a cart her sophomore season, but Corn will tell you the former three-sport standout still suffered somewhat by the condition and is still bothered by it to this day.

Compartment Syndrome (C.S.) occurs when excessive pressure builds up inside an enclosed muscle space in the body. It can impede the flow of blood to and from affected tissues. Acute C.S. usually is the result of a major event, such as a broken leg, whereas Chronic C.S. may be caused by regular, vigorous exercise.

The American Academy of Orthopaedic Surgeons refers to it as “a painful condition that occurs when pressure within the muscle builds to dangerous levels” as well as “very rare.” It reports fewer than 20,000 cases per year in the U.S. Compartments consist of a group of muscles, nerves and blood vessels in the arms and legs covered by a tough membrane which does not stretch or expand easily.

“It is most often caused by athletic exertion,” according to the AAOS OrthoInfo, and “usually relieved by discontinuation of the exercise.”

Corn appealed to the NJCAA for an exception to be made which would allow Kaufman to compete while using a golf cart. Corn cited the case of Casey Martin, who was successful in his suit a couple of years earlier against the Professional Golfers Association; Martin, a former teammate of Tiger Woods at Stanford University, had lived with a congenital circulatory disorder since birth, Klippel-Trénaunay-Webber Syndrome, and received permission to utilize a cart under the Americans With Disabilities Act.

Kaufman, Hemann, Biddinger and Nicole Adams were joined for their sophomore season by another South African, Freshman Surita Risseeuw, and Freshman Meredith Mosel.

Kaufman set the pace for her RLC mates with a 156 (75-81) at the Ball State University Classic. The 2004-05 contingent then tied the previous team’s 36-hole mark at Illinois Wesleyan before establishing new lows for both 18- and 36-holes by repeating at the Spring McKendree Invite; their 632 (319-313) was 30 shots better than the nearest opponent.

More records fell in the Region XXIV showdown. Risseeuw was two better than defending champion Kaufman and her 159 (80-79) – two under her winning score from the year before – and the team bettered the Region record by 17 shots and won by 46 with its 645 (324-321).

She is enrolled in the Professional Golf Association’s Apprentice and Teaching Professional program. She was a Golf/Teaching Pro for Indian Ridge Golf Club in Oxford, Ohio, when she was hired in March 2014 as the Women’s Coach at Indiana University East.

In between, she returned to familiar territory as a Lady Warrior Assistant Coach in Golf for three seasons from 2009-12 and in Softball under Coach Dave Ellingsworth the last two (2015-17).