INA, Ill. (April 24, 2018) – It was a night of milestones. Three of Rend Lake College’s finest athletes were recognized for their contributions on the court and on the diamond by being inducted into the RLC Sports Hall of Fame.

There was also a special milestone for the organization as well. This 19th annual induction ceremony saw the Hall of Fame grow to 50 honorees, split between RLC athletics top teams, players, coaches and supporters.

The evening kicked off with iconic Warrior Basketball Coach James “Hummer” Waugh sharing his thoughts and memories on the first of the ceremony’s distinguished competitors, Ronnie Henderson (Men’s Basketball 1971-73). 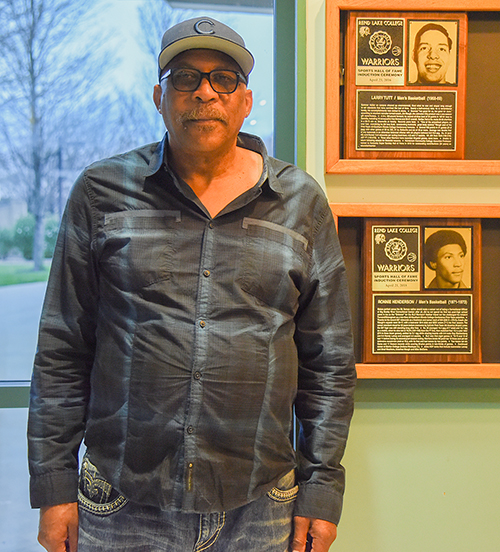 “The first time I saw Ronnie play was at a middle school game. I’m not a very smart guy, but I could look at Ronnie and knew, he was going to be pretty good. We knew he was going to have a good future, not only as an athlete but as a person too,” Waugh recalled.

“I don’t know why he came here. I know we wanted him. I thought we would be a good fit for him. I don’t know that he knew he would come here and have success and transfer on to Marion College in Indiana, graduating with his degree in Economics.”

The impact Henderson had on the court was undeniable. According to a piece written by retired RLC Sports Information Director Bob Kelley:

His career rebound standard stood for 23 years before it was overcome by National Junior College Athletic Association First-Team All-America and RLC Sports Hall-of-Famer Bryant Lowe; the single-season high mark of 367 was still standing long after that.

In the 20-win Warrior campaign in 1972-73, Henderson & Co. started 8-0, then came out on top in 10 of the last 11 before dropping its second post-season outing. The record-setters broke the 90-point bar on 13 occasions and yet still managed to establish a defensive record-low yield at 72.2 ppg as well. The first and last of those six setbacks were by two points.

The two teams powered by Henderson and offensive leader Sonny Wyatt established six Game and 11 Season records while scoring 80-plus points in two-thirds of their games. Exciting to watch? In a wild display against Lockyear Business College out of Evansville, IN, RLC set records for Field Goal Attempts (107) as well as Rebounds (75).

“Ronnie always played hard. You didn’t want to be on the floor with him if you didn’t play hard. He thought every rebound was his. He wasn’t the most athletic or fast, but yet, he led the team in rebounding because he had that competitive spirit. But, he was a quiet leader,” said Waugh.

For his part, Henderson put the quiet leadership on display as he came to the podium to humbly accept the honor, issuing a grateful “Thank you” to those gathered and sharing a laugh and a handshake with his former coach.

A Warrior baseball standout was the next to be recognized as another iconic RLC head coach took the podium.

“Scott [Wagner] was All-Conference both years. Back in those days it was called Southern Illinois College Conference. He was All-State, back then it was called All-Region, but the region was the entire state of Illinois. That was a great honor. He was also named All-Great Lakes which included all the states above us,” said former Warrior Baseball Head Coach Mike McClure. 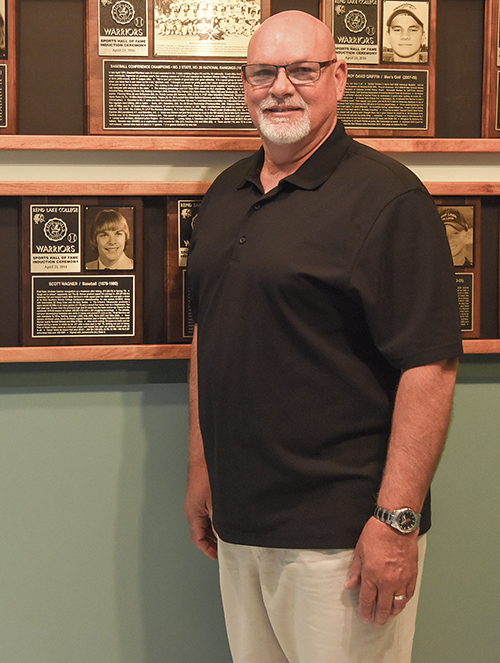 With RLC, Wagner hit .335 with 80 runs scored, 82 runs batted in, seven home runs, a .492 slugging percentage and .452 on-base percentage during a two-year career catching for Rend Lake College during the 1978-80 seasons.

“He was not the greatest practice player. I tried to coach him his freshmen year, and I just thought that we had two hard heads and they would be butting together all the time. So, his sophomore year I’d just tell him that the game was tomorrow, make sure you’re there on time. We got along great after that,” joked McClure.

Wagner took time to thank everyone who had a hand in him standing up there, from the committee to his family to his teammates. He mentioned all the people who made the honor possible.

He became emotional when thanking his parents for their hard work and dedication in supporting him.

“Thirty-eight years ago, they never missed a game, and they are still at it. You know what they did today?” Wagner asked those in attendance. “They went to my nephew’s baseball game, and they can’t wait for their great-granddaughter’s first t-ball game. The best part of this is that they get to experience this with me today. That’s really special for me.”

For the evening’s final honoree, Waugh took center stage once more to share his memories of how Tracy Hyatt found herself leaving Indiana for Ina.

Hummer recalled calling local college coaches to ask about potential players for RLC. A coach at Murray State put Hyatt’s name forward, saying that the university didn’t have a scholarship open for her, but she would be a heck of a player somewhere. 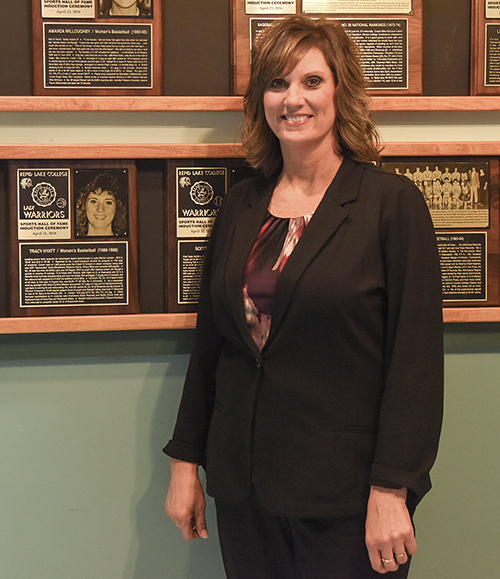 That was all Hummer needed. He brought Hyatt to Ina, and she said she made up her mind shortly after meeting RLC’s legendary coach.

“So here I was taking the word of a coach on a player I have never seen play, and it paid off. She was part of two really, really good teams, and she was a factor in why those were such good teams. Those two teams won 51 games in two years. Tracy’s sophomore team might be one of my favorite teams I ever coached. There was a lot of character on that team,” recalled Waugh.

Again, according to Kelley:

In 2011, she was named to the Indiana High School Basketball Silver Anniversary Team, one of 18 women to be so honored. Five years later, the Owensville native was named a Charter Member in The Greater Evansville Basketball Hall of Fame, which “honors the Tri-State’s current and former high school, college and professional basketball standouts as well as coaches, administrators, officials and fans.”  Fellow inductees in April 2016 included such Illinois notables as Coach Ron Felling, Jay Shidler and Marty Simmons of Lawrenceville and the McLeansboro Father-Son duo of Jerry and Brian Sloan.

She left RLC as the No. 2 scorer all-time for a program in its 11th year of existence. Today, her inclusion in the Lady Warrior 1,000-Point Club puts the 5-10 forward in select company along with new HOF “teammates” Susie Woodward, Rebecca Harris, Cheryl Weis and Amanda Willoughby. The long-range shooter benefited when the 3-point arc was introduced to the college game prior to her second Juco season.

Hyatt was a two-time All-Great Rivers Athletic Conference pick and All-Region XXIV as a sophomore, when she led the Lady Warriors in scoring 19 outings, 13 of those with 20-plus, with highs of 31 at Kaskaskia and 32 in a Danville Area Tournament championship win over the hosts. She averaged 17.8 ppg and 2.3 assists, but her rebound tally slipped to 3.4 with additional help from the 6-2 Weis. She hit .546 from the field, including 19 of her team’s total of 23 treys in Year One, and .838 from the charity stripe (67-80), No. 5 nationally.

As a newcomer sharing the spotlight with Soph Cynthia Wessel, she posted 15.7 ppg, 8.4 rpg and 3.2 steals/recoveries. She led the team in scoring nine times and rebounding 10, with 20-plus points in five games, including 30 at Shawnee and 32 (record 16 field goals) and 12 boards in a 70-69 regular-season finale verdict over Wabash Valley. She also had 17 rebounds in a rout at Saint Mary-of-the-Woods (IN), located in Terre Haute not too far from her hometown, and boasted 10 or more in six other games.

“This is just a humbling experience for me. My two years here at Rend Lake College were fabulous, and I just appreciate it so much. It’s nice to be back here and see these familiar faces. I remember coming here, and I just thought the campus was beautiful, and meeting Hummer was all it took. When you come here, it was just like a family atmosphere,” said Hyatt of the honor.

The RLC Sports Hall of Fame is located in the Aquatics Center lobby and is open to the public. For more information on Kaufman, Campbell, the 1983-84 Basketball team, the 2017 Sports Hall of Fame Induction, and all things athletic at The Lake, visit www.rlc.edu/athletics.