INA, Ill. (July, 23, 2018) - What do you do when you lose a Rend Lake College Hall of Fame athlete turned head coach? You go out and bring another one in.

May is a product of Staunton High School where he was a standout golfer. His play caught the attention of venerated RLC men’s coach Dave Smith who recruited May to play for the Warriors during the 1994-96 seasons. To say the teams were successful would be a massive understatement. 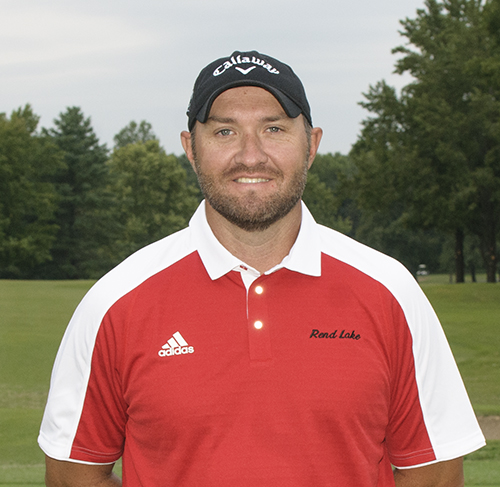 “I played on two really good teams. I think we finished 2nd in the nation one year and 3rd the other. My freshman year’s team is a member of the Rend Lake College Athletics Hall of Fame. We had great players on that team. Two of the guys I played with were also individually inducted, Matt Armstrong and Jace Bugg, who passed away,” May recalled.

Following his time at RLC, he went on to play golf at Western Illinois for a year.

He returned to Southern Illinois in 2000 to take a teaching position at Zeigler-Royalton, and has been with the school ever since. He currently serves as athletic director at the school and coaches girls basketball. He began the golf program for the Tornadoes, coaching both boys and girls for six years.

“I had a great time. We had a really good season. We made it to the national tournament with a good finish. We’ve got some good recruits coming in, so I think we will be strong again next year. I talked to Danielle and it sounds like the women she recruited in are going to be really good too, so I’m excited to get started with them.”

The year under Smith provided May with a lot of insight into the particulars of coaching at the college level in regards to setting up tournaments and the other logistical work that goes into athletics at this level.

“Coach Smith and I fell right back in. He was a great guy to show me the ropes. He’s been doing this for 25 years. It was great to learn from him again.”

When asked about his involvement with the men’s team moving forward, May said that the current plan is for him to do both, help Smith with the men and take over head coaching responsibilities for the women.

“Danielle did a great job with the program last year, and of course Coach [Cindy] Corn before her ran a great program for years and years. So, we talked with the men’s program of building the tradition back up, that’s definitely what the plan is for the women’s team too. We want to make sure it continues that history of excellence. We have some great recruits coming in, so I’m excited.”

May said his top priority is getting to know his new players. But ultimately, he has the goal of qualify for fifth-straight national tournament.