INA, Ill. (Dec. 4, 2015) – Generosity and inspiration overflowed at last night’s Rend Lake College Foundation Annual Dinner, held at the Holiday Inn in Mt. Vernon. With two sizeable donations on the books and a rousing speech from the Alumnus of the Year, RLC donors, faculty, staff, and guests left with a feeling of optimism and hope.

Leading the way in generosity was the 2014 Alumnus of the Year, Jim Mounier and his wife Carole, who after a year of closely following the college, decided to give the largest donation the Foundation has ever received. Already totaling a value of seven-figures and growing, the Jim and Carole Mounier Legacy Society was announced by Foundation CEO Shawna Bullard.

“This project has been one year in the making and it is the largest-ever donation to the Rend Lake College Foundation,” said Bullard. She later explained, “The Jim and Carole Mounier Legacy Society is a bequest of their property to the Foundation. The Mouniers have chosen the Foundation as beneficiaries in their estate, which means when they pass away, the money they've worked for will continue to work for our students through their gift.”

Bullard added, “a planned gift is the most-valuable donation an organization can receive because they are often the largest, and this particular gift will hopefully continue to grow. It’s also very inspirational to other donors and helps to educate others in the many different ways to give.” 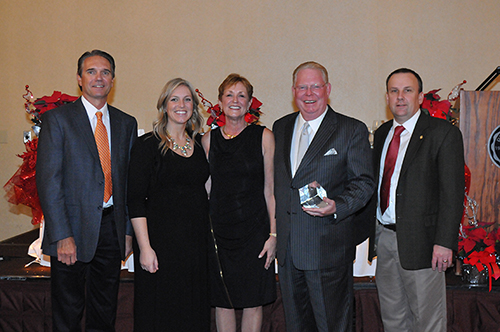 Upon receiving special recognition for the Legacy Society, Mounier, a 1972 graduate of RLC, said he’s proud to be able to give back to the place he said changed everything.

“Attending Rend Lake was one of the best decisions I ever made, and I believe it is probably the hidden jewel of Southern Illinois,” he said. “We don’t invest in things that don’t work, but we’ve been following the college and foundation very closely for the past year, and we think it works very well. We’re honored and humbled to be able to give this donation.”

Mounier is currently the Senior Vice President at Merrill Lynch in Rockford. A native of Linton, Ind., he relocated to Southern Illinois and completed his senior year at Mt. Vernon Township High School in 1970. At RLC, Mounier focused on a mathematics degree before transferring to Illinois State University. In his spare time, Mounier maintains several apartment buildings and has published a book. Together, Jim and Carole enjoy golfing.

The Mouniers weren’t the only big donors announced during the Annual Dinner. An anonymous donation specifically for the RLC Foundation Children’s Center was also announced by board member Rich Yunkus in the amount of $195,000.

Though the donor wishes to remain anonymous right now, Bullard said the children’s library in the new addition will likely be named after her. Groundbreaking on the addition is expected to begin in February or March and students will be using the facility by the Fall of 2016.

An emotional Yunkus expressed his disbelief when the donor came to him wishing to make donations to national charities. Upon hearing and studying about the Children’s Center addition, the donor then changed her mind and decided to give back to educating young people.

“We thought it would take 15 to 18 months to fundraise for this project, but that’s not the case. We’ve had an individual who wanted to make some donations to various charities, and instead decided to make a large donation to the Children’s Center for this addition to help young kids,” he said. “This is a person who lives in a modest house with a 10-year-old car who has worked hard and saved her money, all her life, and who wants to give it all back. She wishes to remain anonymous for now, but she donated $195,000 to the addition.”

This year’s donation will be added to last year’s $100,000 donation from Marjorie Farrar to completely fund the project, which will be a gross motor room to give students the chance to play indoors and have their own library. Farrar was one of the catalysts of the Children’s Center and made the lead donation of $100,000 in 1995 to start the process of building.

For his help in securing the anonymous donation, Yunkus was awarded the Presidential Award for being an outstanding board director. The 22-year-veteran of the Foundation is well known locally for being an All-State basketball player who is the first, and only, Georgia Tech student to be inducted into their Hall of Fame immediately upon graduating and who still holds the scoring record after 40 years.

Foundation Board Director Rich Yunkus, CENTER, is awarded the Presidential Award for his role in securing funding for the RLC Foundation Children's Center. Also pictured is, FROM LEFT, Gesell, Bullard, Yunkus, Board Director Hunt Bonan, and Wilkerson. Click on the image for a larger view.
(ReAnne Palmer / RLC Public Information)

“I’m very honored to receive this award,” said Yunkus. “Everyone here knows what our Foundation does and I hope you continue to support us so we can continue into the future.”

The Annual Dinner also recognized the 2015 Alumnus of the Year, orthopedic surgeon Dr. Brian Kern, a native of Southern Illinois who now resides in Paducah, Ky. Kern was nominated by RLC Athletic Director Tim Wills, 1996 Alumnus of the Year, who was the basketball coach for Kern when he attended RLC from 1992-94.

“Brian will always be one of my guys, anyone who played for me will always be that, but he’s a young man now with so much more ahead of him. I’m proud to introduce Dr. Brian Kern as the Alumnus of the Year,” said Wills.

Kern brought a sense of fun to the podium by explaining that he’d given the speech to two of his children just a couple nights before, and when one fell asleep, he changed up his discourse. 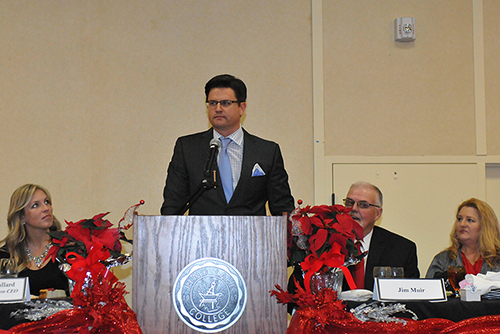 Dr. Brian Kern addresses attendees at the Foundation's Annual Dinner between Bullard, LEFT, and Jim and Lisa Muir, RIGHT. Kern spoke about his time at RLC and the education he received that led to his current profession as an orthopedic surgeon. Click on the image for a larger view.
(ReAnne Palmer / RLC Public Information)

“I decided that I want to take this opportunity to talk about what Rend Lake College has done for me and how someone can utilize the college to be successful,” said Kern. “I was fortunate to play for two excellent coaches at Rend Lake College, Tim in basketball and Coach Rich Campbell in baseball. It was a humbling experience to play for two great individuals who went the extra mile for their students.”

He added, “When I got to Rend Lake, I realized that I wasn’t as good as I thought I was [athletically]. It was a lot higher level of competition than I was used to, but I was able to grow physically and mentally. I learned a lot about what I wanted to do with my life. This all started with my decision to attend Rend Lake College, and I want other students to know they can start their career at Rend Lake and end up wherever they want.”

Kern continued to hit key points in his life, both the successes and the setbacks, including his transfer to St. Louis University to play baseball at a Division I school but then inability to get into the Physical Therapy program. He said it was his RLC chemistry professor, John Fisher, who encouraged him to consider a career as a physician.

But before he entered medical school, Kern was drafted by the Oakland Athletics organization to play in the Minor Leagues. For two full seasons, Kern said he lived his dream of playing professional baseball before being released at the beginning of his third season.

“I told my son, it’s okay to fail. You will fail at a lot of things and that’s okay. What’s not okay is to quit,” said Kern during his speech. 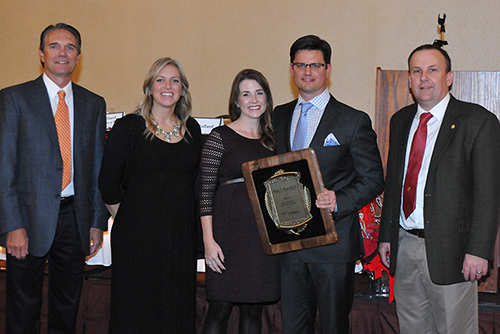 Dr. Brian Kern, SECOND FROM RIGHT, and his wife Summer, CENTER, are pictured with the 2015 Alumnus of the Year plaque after the RLC Foundation Annual Dinner. Also pictured is, FROM LEFT, Gesell, Bullard, Summer Kern, Dr. Brian Kern, and Wilkerson. Click on the image for a larger view.
(ReAnne Palmer / RLC Public Information)

He then returned to Southern Illinois to attend Southern Illinois University’s School of Medicine and completed his orthopedic surgery residency in Springfield and a sports medicine fellowship in Los Angeles. Kern and two other physicians banded together to start the Orthopedic Institute of Western Kentucky in 2009, a center that has since grown to 10 physicians and more than 100 employees.

“I think Rend Lake College did a lot more for me than I did for the college,” said Kern. “What I really want to convey is I went to Rend Lake College and improved on a lot of different aspects in my life. In doing so, I obtained a scholarship to an excellent university, played college and professional sports, and eventually was able to receive acceptance into medical school and become an orthopedic surgeon – RLC was the first step in making this possible.”

Two other individuals were recognized at the Annual Dinner. Bullard gave a special, posthumous tribute to Howard Payne and Dr. Warren E. Petty for their service to the Foundation.

“I lost two friends and we lost two of the strongest supporters of Rend Lake College and the Foundation,” said Bullard. “Howard's goal was to be 100, but he was ready to go home to be with his wife after that. True to form, I visited with him on his 100th birthday and he was doing very well. He passed away soon after, and I know he's very happy to be reunited with his wife, Helene. He was and always will be one of my biggest mentors.”

She added, “Dr. Petty left behind a void in his family because of the amazing things he did. The Petty family created a scholarship in his name when he passed, and though the Foundation can’t fill the void he left, we’re going to help the family create an endowment to honor Dr. Petty’s legacy. I think of both of these men as mentors to me, and they will be greatly missed.”

The Annual Dinner was sponsored by Hamilton County Communications, Inc. and Peoples National Bank. Jim Muir of WQRL in Benton, the 2009 Alumnus of the Year, was the emcee. The invocation was done by Eric Black, RLC Board of Trustees Chairman, and there was a vocal performance by RLC student Olivia Bailey, accompanied by Caitlin Keele on piano. For more information about the Foundation visit www.rlc.edu/foundation; call 618-437-5321, Ext. 1214; email ; or check them out on Facebook or Instagram.