INA, Ill. (March 2, 2020) — With tuition on the rise at neighboring institutions, Rend Lake College is able to maintain an affordable cost for its students once again.

During a recent meeting, the RLC Board of Trustees approved keeping the cost per credit hour rate at $110 for the fourth straight school year. The last tuition increase the board approved was in February 2016. 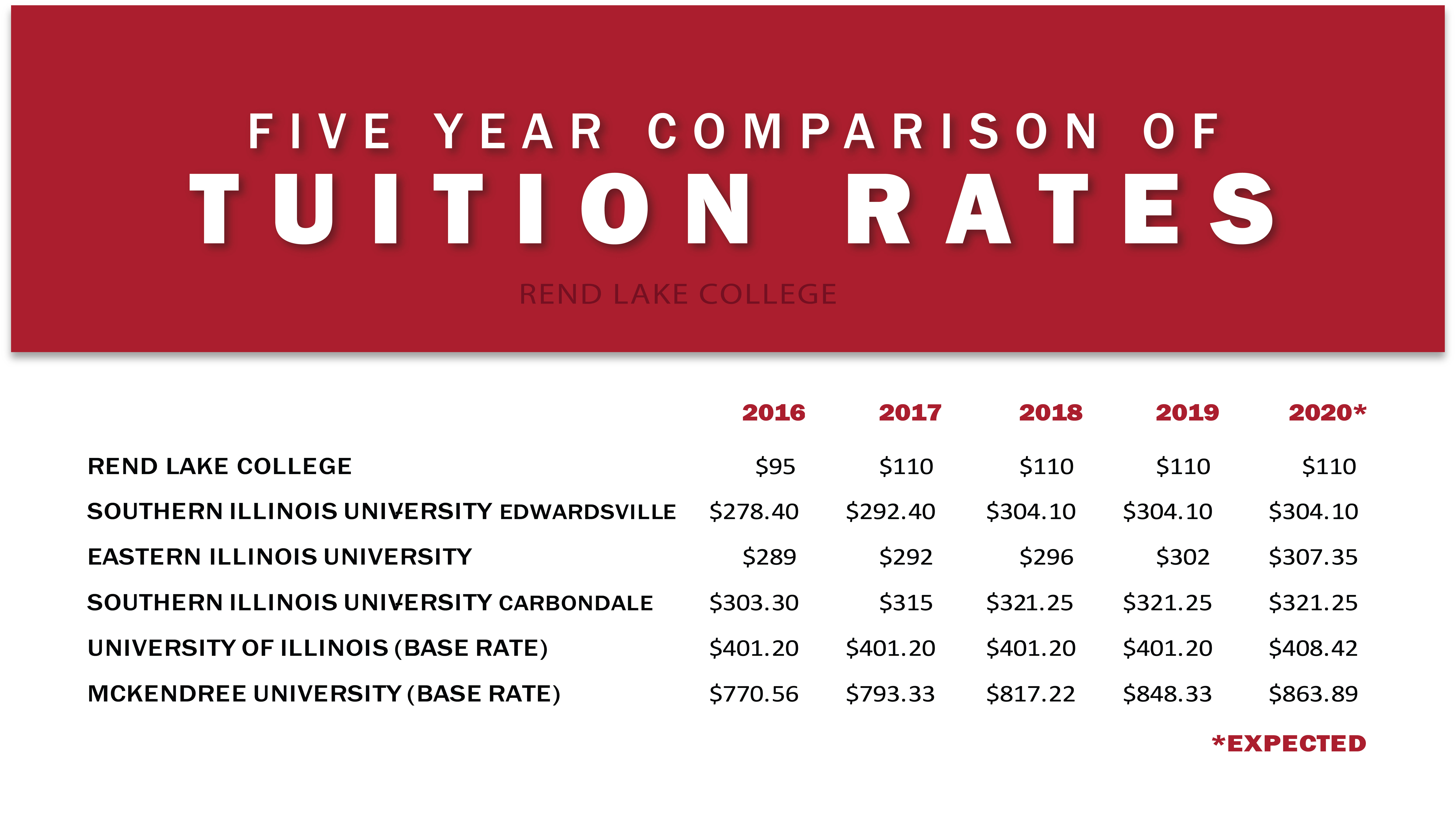 “We’ve worked hard to keep the costs down for our students while maintaining a healthy budget,” said RLC President Terry Wilkerson. “Affordability for our students is important to us and by not raising tuition rates for the fourth year in a row, we’re able to keep Rend Lake College as one of the most cost-effective options in the state.”

In the meantime, cost at four-year universities in the region has continued to increase. Southern Illinois University-Carbondale and Southern Illinois University Edwardsville have both had a freeze on tuition for the past couple of years. But going back to 2017, SIUE’s tuition per credit hour for undergraduates increased by about 4% and SIUC’s increased by about 2%, according to both schools’ Fact Books. Undergraduates at Eastern Illinois University also saw about a 5.25% increase during that period, according to EIU’s Office of Financial Aid. In the University of Illinois system, in-state undergraduates have not seen a tuition increase in Urbana-Champaign, Springfield or Chicago in the past six years. However, that changed in January when the University of Illinois Board of Trustees approved tuition increases of 1.8% for next year for incoming in-state freshmen in Urbana-Champaign and Chicago, and 1% in Springfield. And undergraduates at the private institution McKendree University have seen about a 12% increase in tuition since 2016, according to data from the National Center for Education Statistics.

Compared to these universities, RLC’s tuition remains a fraction of the cost, and tuition rates remain competitive with community colleges throughout Illinois. But tuition affordability is not where it ends at RLC. Around 80% of students attending the college are eligible for financial assistance and the RLC Foundation helps provide more than $240,000 in scholarships on an annual basis. These are just a few of the reasons the financial site WalletHub continually ranks RLC as the top community college in the state as well as one of the best returns on educational investments in the country.

With more than 100 degrees and certificates available for prospective students, Rend Lake College provides boundless opportunities for members of the community at a reasonable price. To get started on your journey, visit rlc.edu.