INA, Ill. (July 29, 2017) - Rend Lake College has always been dedicated to enriching the lives of the students and district members through affordable education and varied programs, activities and engagement opportunities. Yet, in the late 80s, there was a very specific, and important, segment of the population that the college wasn’t serving adequately, the youngest members of the community.

The need didn’t go unnoticed either. In 1988, the North Central Association issued a report, naming a childcare facility as RLC’s “number one need.” It was a cause picked up by the Rend Lake College Foundation, and then, in turn, championed by Marjorie “Grandma Marj” Farrar.

Pat Kern, former CEO of the Foundation and current RLCF Board member, recalls the beginning of Farrar’s legacy at the college.

“In 1997, the Foundation was stagnant for a few months. We wanted to do something very badly. We wanted to be active and to pick up a project,” explained Kern. “The college’s number one need at the time was a daycare center for the students, and that was presented to the Foundation and we took on the project.”

Then, the estimated cost of the Children’s Center was approximately $360,000. With no money raised, Farrar made the initial donation of $100,000 that served as a catalyst for the project. Soon another major donor in Coyn Mateer matched Farrar’s donation, and with help from other community members, the Children’s Center was soon fully funded. The RLCFCC began construction and opened in the fall of 1998.

“Marjorie loved children and she loved to hear children laugh. Most of all, she loved helping,” said Kern. “She always came to Thanksgiving dinner at the Children’s Center and she visited as often as she could. She also helped college students travel abroad. It was her opinion that education happened over a lifetime. Now her family, who she loved dearly, is carrying on her legacy by continuing to support the RLC Foundation.” 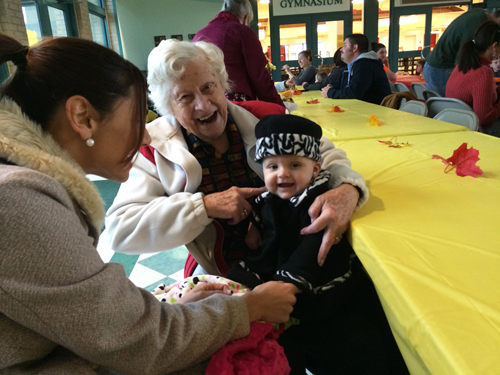 Part of that legacy also includes the initial donation of $100,000 to the RLCFCC in 2014 to get the ball rolling on a new addition. Now called the Skill Development Room, the 1,500-square-foot space provides children with an indoor recreational space and learning library.

“My mother wanted to thank you all for this honor and recognition tonight. She’s always had a special love for the RLC Foundation Children’s Center and it always brings a smile to her face when she talks about it,” said Farrar’s son Fletcher at the time. “I’m pleased to announce she will be giving a $100,000 donation to the Children’s Center to continue helping the center as it expands and grows to meet the needs of the college and the community.”

Farrar’s donation was announced during the 2014 RLCF Annual Dinner, and was shortly followed by another significant donation from an anonymous individual. Within two years, the addition was completely funded and opened in time for the Fall 2016 semester.

A ribbon-cutting was held for the Skill Development Room in August and was led by her son Fletcher in her absence.

While Farrar’s legacy primarily tied to her extensive work helping to found the children’s center, her first donation to the college dates back more than two decades when she, and her husband Fletcher, took part in the 1995 Capital Campaign to match a Title III grant. With matches from the Federal government, the grant totaled $750,000 to create the RLC Foundation and an endowment for generations of students.

In addition to her donations to the RLCFCC, Farrar also donated the lot located north of the Holiday Inn in Mt. Vernon, which was recently sold and is now under construction. Valued at approximately $500,000, the donation is one of the largest gifts-in-kind the Foundation has ever received.

In total, Farrar and her family are credited with more than $250,000 in donations to the college, specifically to the RLCFCC, to reach the Diamond level donor status. Farrar passed away on Nov. 27 at the age of 94. In the history of the Foundation, only 11 individuals have reached the Diamond donor level.

Outside of her contributions to the college, Farrar was a school teacher in Salem, Ill., and Oklahoma. She also worked office jobs, one specifically at the family business, Farrar Oil Company, and owned Farraway Farm near Bluford. She also volunteered and worked at her church, Central Christian in Mt. Vernon. In 2001, Farrar was named a Senior Saint by the Jefferson County Chamber of Commerce.

In 1998, Farrar was presented with the 19th Annual RLC Foundation “Community Support” Award during Commencement ceremonies on the Ina campus. It is an award given to an individual, business or organization that over a period of years has made outstanding contributions to the college and its students.

To see just who Farrar was, we only need to look at what she said when given the honor: “I will be honored even more by the young women who will use the day care facility so they can earn an education.” 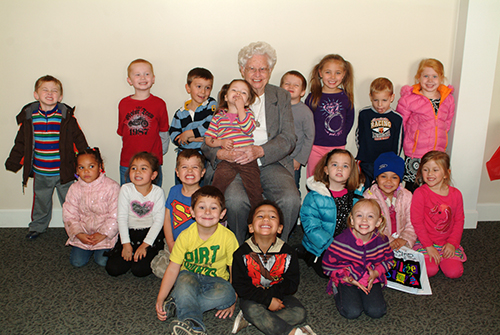 Farrar with a class at the RLCF Children's Center

Both Farrar and Mateer are immortalized with a plaque inside the building that would never have been possible without their help.

Because of the efforts of two major donors, Marjorie Farrar and Coyn Mateer, and the Foundation Board members, young parents now have a first-class facility and program to which they can bring their children. Many parents could not attend class without such facilities.