INA, Ill. (Nov. 17, 2017) - Educator, world-traveler, author, advocate and benefactor; Dr. Carl Lincoln Schweinfurth was a lot of things to a lot of different people, but his unbridled generosity to Rend Lake College, the RLC Foundation and the students of the institution shows a remarkable legacy of altruism.

Schweinfurth first became involved with the college through the Foundation. During the organization’s first year (1979), he agreed to serve as Chair of the Financial Development Committee for several months. He was elected to the RLCF Board of Directors during the Second Annual Dinner Meeting in fall 1980. 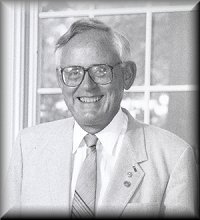 He went on to succeed Howard L. Payne as Vice President of the Foundation during the 1981-82 academic year and served as RLCF President from 1984-86. During that time, he was also recognized as an original member of that group’s “President’s Circle” of donors.

He was quick to make an impact. In 1980 he led the charge in getting the college sign near Interstate 57 erected that still stands almost 40 years later.

There were also a number of student-focused initiatives launched by Schweinfurth’s philanthropy. Most notably, he made it possible for qualified youth to benefit from Summer Career Camp Nursing experiences at Southern Illinois University Edwardsville through the RLC “Project First Class” project and has donated other resources to that grant program for the betterment and encouragement of minority youth in his hometown Mt. Vernon area.

Yet, helping others was just one of Schweinfurth’s passions. He was an avid traveler and lover of the arts, two things he also helped cultivate at RLC.

For reference, the good doctor had visited six continents and all 161 countries where Rotary Clubs exist by the mid-90s. He felt a strong calling to bring those experiences closer to home so others could experience other cultures.

The college’s music program still utilizes a very valuable Steinway Concert Grande Piano generously donated by Schweinfurth, who was an accomplished pianist himself.

And, in perhaps his most generous display, it was announced at the 16th Rend Lake College Foundation Annual Dinner that he bequeathed part of his estate to the RLC Foundation.

Schweinfurth once said, “Service is the rent we pay for the space we occupy on earth.”

For his numerous contributions, in spring 1994, he became only the third person ever to receive the prestigious “Board Emeritus” Award from the RLC Foundation.

After his passing in Dec. 26, 1996, the Schweinfurth Foundation was established to carry on the good works of its namesake. Over the years, the organization has continued to support RLC students through grant awards, aimed at helping those who shared Schweinfurth’s passions for music and travel.

Over the history of the college, the Schweinfurth Foundation has donated thousands of dollars to projects like:

A resolution in Schweinfurth’s honor was ratified by RLC and the RLCF on Sept. 3, 1996.

The resolution concluded with:

“Therefore, be it resolved, Dr. Carl Lincoln Schweinfurth is hereby recognized formally for all of these humanitarian endeavors and numerous contributions made over many years of dedicated involvement and service with the Rend Lake College Foundation Board of Directors, Rend Lake College, its students and staff.

Let it be known, the Rend Lake College Foundation Board of Directors and the Administration of Rend Lake College sincerely appreciate the outstanding contributions and worthwhile efforts of Dr. Carl Lincoln Schweinfurth to make the Ina-based institution of higher learning a beneficial experience “where learning never ends . . .” for all residents of the district and Southern Illinois.”

Schweinfurth’s dedication to education did not start with RLC though, and his dedication to improving the lives of those around him extended much farther than Ina.

The Korean War veteran got his professional start by teaching for 20 years, and by all accounts was an outstanding educator. In fact, he was honored as “Outstanding Professor” at Bethany College (WV) in 1968 and served many years as the West Virginia State Chairman of the National Association of Foreign Student Advisors. He developed the first African Studies Program in West Virginia and was recipient of two Fulbright Awards.

According to the yearbook staff, “The Class of 1967 proudly dedicates this Bethanian to Dr. Carl L. Schweinfurth. Dr. Schweinfurth has been with Bethany College for fewer years than has the Class of 1967, and yet he has earned the respect and praise of us all. As a Counselor he has always been ready to put the needs of the students first. No problem is too great or too small to merit Dr. Schweinfurth’s earnest concern.”

Other major honors are numerous for the man who has been Chairman of the Board for the new First Bank and Trust Company, now Mercantile Bank of Mt. Vernon, since 1981 and a Director since 1966.

Schweinfurth was “Citizen of the Year” in 1985, as presented by the Greater Jefferson County Chamber of Commerce; founding President and now an Honorary Lifetime Member of the United Way of Jefferson County; President of the Mitchell Foundation since 1996; a District Governor for Rotary International (1975-76), and directed a $1 million community fund drive in 1982 on behalf of Good Samaritan Hospital.

He was appointed to the Illinois Arts Council (1984-91) and named a founding Trustee of the Illinois Academy of Fine Arts, both by then-Gov. Jim Thompson, and was on the Board of Friends of Morris Library at Southern Illinois University-Carbondale.

Schweinfurth was very active with the Mitchell Museum in Mt. Vernon. He established an international forum in Mount Vernon where local leaders would come together with international leaders.

His father was a widely-known Mt. Vernon industrialist who owned and operated the Mt. Vernon Furnace and Manufacturing Company for many years. Upon his father’s death in 1966, Schweinfurth inherited coal, oil, gas and other mineral interests and business.

His Foundation’s contributions to the local landscape include the Schweinfurth Home at Cedarhurst Center for the Arts, and the Schweinfurth Museum and Interpretative Center that houses collections and memorabilia for the Jefferson County Historical Society. A dinner held in his honor inspired the creation of Jefferson County’s Senior Saints Hall of Fame

In 1995, he became only the fifth individual to receive the Charles Bane Humanitarian Award for the State of Illinois.

RLC wasn’t the only institution that he contributed to. He founded the Southern Illinois International House for graduate-level foreign students at Southern Illinois University, from which he graduated in 1964 with his Doctorate Degree in Government.