INA, Ill. (Aug. 30, 2018) — The Rend Lake College community came together this afternoon to bury a time capsule at the Ina Campus Clocktower and put a finishing touch on its 50th anniversary celebration. Founded as Mt. Vernon Community College, it became Rend Lake College through a public vote in 1967. The events and individuals that make up the institution's history are well documented at www.rlc.edu/50.

Numerous members of the Rend Lake College community were on hand Thursday to celebrate the time capsule getting placed in the ground.

A good representation of the college — from the student body to the Board of Trustees — was in attendance at the event. A three-foot tall cylindrical time capsule was filled and lowered into the ground by President Terry Wilkerson and Trustee John Kabat of Mt. Vernon. Student Trustee Mackenzie Trader, a freshman from Scheller, ceremoniously cast the first scoop of dirt. The small, golden shovel she passed to Kabat was the same one used when college leaders broke ground on the Ina campus decades before at the same location. Wilkerson tossed a shovel full on the capsule and thanked the crowd of faculty, staff and students for sharing in the historic day. 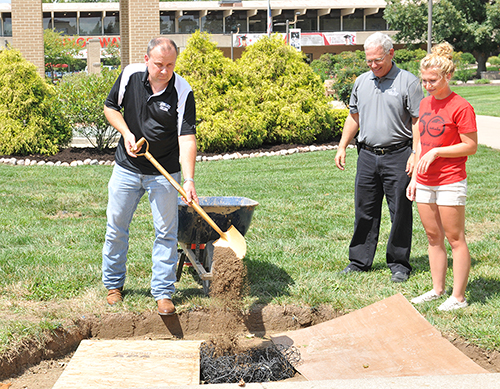 RLC President Terry Wilkerson uses one of the shovels that broke ground on the college's campus 50 years ago during Thursday's time capsule burial. RLC Board Member John Kabat and Student Trustee Mackenzie Trader were on hand to assist.

Contents of the time capsule will be unearthed in 50 years. On the time capsule is a graphic of RLC logos, under which reads: "To celebrate Rend Lake College’s 50th Anniversary, our community buried this time capsule with the intent that it not be opened until RLC’s 100th Anniversary in 2067. Its contents are an effort to display the history of Rend Lake College and its predecessor, Mt. Vernon Community College. We also tried to capture the state of RLC during our time and the people who had a part in leading its development. A majority of the things inside this capsule are digital files stored on discs and drives. Enjoy the look back. We hope many of us here on that day are with you here today."