INA, Ill. (Dec 20, 2018) – The Rend Lake College Foundation honored champions, those who came before and blazed a trail to follow, and those who are up and coming, ready to make a difference, at the 2018 Annual Dinner earlier this month.

It could be interpreted as a melancholy year for the institution with a number of important individuals passing, but that view would shortchange the legacy of a group of people who did so much to ensure the students of Rend Lake College could thrive. This year’s dinner was not defined by those lost, but by the gifts they left behind; a path toward education and a better life.

First and foremost, the Foundation recognized the legacy of the late Curtis Smith – a basketball and coaching legend who lost his battle with cancer on June 24, 2018 – as the 2018 Alumnus of the Year. Accepting the award on his behalf were his wife, two daughters and son-in-law.

“What Curtis taught me was that, in those darkest times, he wasn’t afraid of death. He has his faith, and he showed me what it meant to be tough. But more than that, he showed me how to love your family as much as you can right up until the end,” said Smith’s son-in-law Jason Drew.

Curtis Smith was a warrior, both in the Rend Lake College sense of the word and by its dictionary definition. On the hardwood, Smith was a force to be reckoned with, fighting tooth and nail to be one of the best basketball players in the area at the high school and college level. The legend still holds many RLC records nearly three decades later, including the number two ranked season in RLC history with 631 total points and as one of the all-time scoring leaders with a total of 1,080 points scored – all of which came before the three-point line.

“Curtis had great toughness. He knew how to fight through adversity and continue on. And, he really did care about kids. He did whatever it took to help them become better young people. The things that he taught those kids, they are going to carry with them for the rest of their lives,” said RLC Athletic Director Tim Wills.

Yet, even after his passing, Smith still continues to make a positive impact in the lives of those around him via the Curtis Smith Memorial Scholarship at RLC.

“Sometimes it’s under some of the most difficult circumstances that you get the opportunity to meet some of the most incredible people. I’m very sorry I didn’t have the chance to meet Curtis Smith, but I’m grateful for the opportunity I’ve had to get to know his family. And, it’s through the very generous donations of Curtis’ family and friends that a new Foundation scholarship has been created in his memory,” expressed Foundation CEO Kay Zibby-Damron.

For the 2018-19 academic year, the Curtis Smith Memorial Scholarship will be awarded to Gavin Richardson of Benton. Richardson attended Ewing-Northern Grade School and played basketball under Coach Smith. Richardson is a sophomore at RLC who is majoring in Agricultural Business. He plans to transfer to Southern Illinois University Carbondale to continue his education.

Zibby-Damron also recognized friends of the college who had passed away in 2018, including two champions whose names are synonymous with Rend Lake College: Jim “Hummer” Waugh and Mark Kern. Videos of each man’s accomplishments at RLC were incorporated into the evening.

When both men passed away, their families designated memorials to the RLC Foundation.  Zibby-Damron announced that the Waugh family was considering utilizing the memorial funds towards the RLCF Children’s Center and efforts would continue to increase this specific fund.  After showing the video of RLC’s longest-serving president, Kern, Zibby-Damron announced that through the generosity of many friends and colleagues that the Mark S. Kern Endowment had been created. This new perpetual scholarship will help at least three students a year.

The RLC Foundation Annual Dinner also spent some time celebrating champions whose good works behind the scenes will continue to benefit students for years to come. For the past 15 years, JoAnn Joy has provided invaluable service to the RLC Foundation and the students it serves through her exceptional tenure on the RLC Foundation Board of Directors. In particular, Joy utilized her valuable professional experience to act as the RLCF Board’s Treasurer from 2007-2018, an undeniably vital position. 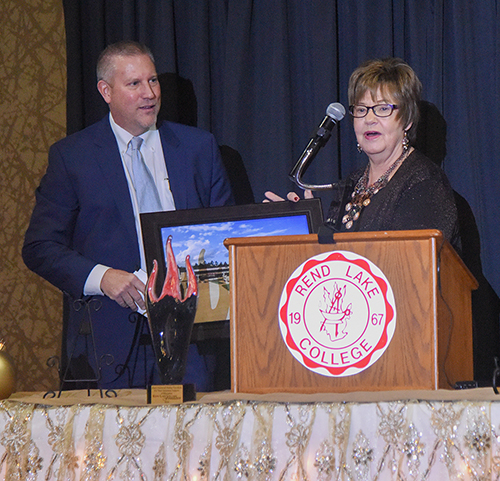 Joann Joy, right, is honored for her 15 years of service by RLCF Board Chairperson Robert Bornheimer, left.

“Tonight we want to recognize someone who has served on Foundation Board so diligently. For most of us on the board, most of our duties consist of attending meetings every other month and a few functions. But, the board’s treasurer has constant contact with Kay and her team. There’s a lot of work that goes into that that most people never see. JoAnn completed this task with very little fanfare and did the job perfectly her entire time serving,” said RLCF Board Chairperson Robert Bornheimer.

Joy said, “I just want to thank everyone. It’s been a pleasure to serve all these years. I’ve really enjoyed it and met so many nice people. It’s a wonderful organization and the contributors are such wonderful people. I’m going to miss all of you a lot.”

Another milestone was reached this year for two alums and champions of RLC Rodney Cabaness and Shad Zimbro. The Sesser natives are co-owners of Black Diamond Harley-Davidson and, through their company, have made an undeniable impact on the region they call home.

Black Diamond has become well known for its charitable contributions and community events. This year, the company’s 10th year of offering scholarships to graduating high school seniors across Southern Illinois, marks an important milestone in the story of Black Diamond’s generosity. Totaling all scholarship donations, the company has awarded $500,000 to local students pursuing higher education. Every year, a dozen area youth are able to attend RLC because of Black Diamond’s generosity. 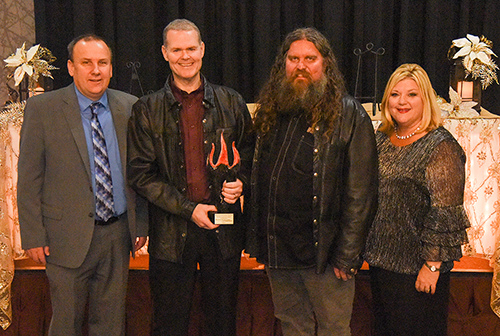 “There are a lot of people out there that might just need that extra leg up. Offering scholarships is just a great way to make sure our kids have the tools they need to succeed. What we really wanted to do when we set it up was to try catch some of those students that were right in the middle,” Rodney Cabaness said after being named the RLC Foundation 2016 Alumnus of the Year.

Black Diamond’s generosity was not the only milestone acknowledged during the Annual Dinner. During the Fall 2018 semester, the RLC Foundation Children’s Center (RLCFCC) officially turned 20, and the entire RLC community came together to celebrate two decades of learning for the smallest Warriors on campus.

To commemorate the event, everyone gathered to sing “Happy Birthday” to the center during the dinner. Following the serenade, several cakes made by RLC Reference Librarian Beth Mandrell were auctioned off to those in attendance, raising hundreds of dollars in support of the RLCFCC. 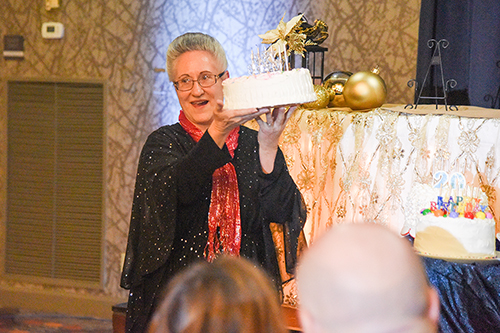 RLC Librarian and renowned cake-maker Beth Mandrell poses with one of her creations that was auctioned off at the dinner to raise money in support of the RLCF.

The program ended with two RLC students sharing their testimony on the impact Foundation scholarships have had on their ability to attend college.

“The scholarships I have received helped me, someone who once thought they were a nobody, to become something more. Without the generosity that supplied these scholarships, I wouldn’t be able to pursue my dream of becoming a music therapist, combining my two greatest passions: helping others and music,” according to RLC student Suzanna LeFebvre of Mt. Vernon.

Classmate Phillip Smith of Christopher also shared his story of how the generosity of scholarship donors has helped him achieve his goal.

“I came into college not as a teenager fresh out of high school but as a husband and father. I had put a lot of thought into going back to school to join the medical community, but finances always prevented that from occurring. Were it not for the generous donations of each and every one of you here tonight, myself and many other students like me might well be stalled in the process of cultivating our own success,” he said.