MT. VERNON, Ill. (Dec. 6, 2019) — A businessman, a golf coach and a longstanding board member were among those bestowed with honor Thursday night at the Rend Lake College Foundation’s Annual Dinner. The 40th annual event was hosted at the DoubleTree Hotel in Mt. Vernon and carried the theme of “Dreams Do Come True,” which was exemplified by the character of all those who were honored at the event.

The dinner provides special recognition and thanks to those who have gone above and beyond in contributing to Rend Lake College and its Foundation. The Foundation also announced the launch of a new campaign that will expand and enhance RLC’s Learning Resource Center. 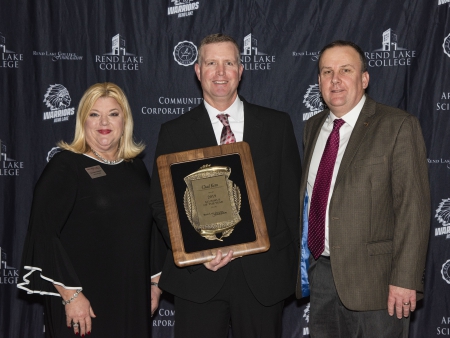 Chad W. Kern joined the ranks of RLC lore when he was named the 2019 Foundation Alumnus of the Year.

Kern, a 1991 graduate of Rend Lake College from Whittington, earned his degree in Agriculture Mechanics before transferring to Southern Illinois University in Carbondale where he earned a bachelor’s degree in agriculture in 1993.

Kern is currently CEO of Schirm USA, a company that makes chemicals for the oil and gas industry. Kern credits his hiring at the company to a duck hunting trip where he happened to meet former Schirm CEO Gus Jones.

But it was the lifelong learning skills obtained at Rend Lake College that started him on his path to success through the company. Kern started at Schirm in the purchasing department but would eventually make his way through various leadership assignments in EH&S, engineering, facility construction and as the director of manufacturing. Then when Jones retired, Schirm began its search for a new CEO, who they happened to find right in their own building. Kern was named the company’s new CEO in August.

“That’s 26 years of never saying no to an opportunity to learn something new,” Kern said at Thursday’s dinner.

He said people often ask him what his role is as a CEO and what it took to get to his current position. As he was standing on the podium accepting his award, he offered one word — believe.

But he did have some help along the way. Kern said he didn’t have much of a plan when he arrived at Rend Lake College, but a group of professors he referred to as “the three wisemen” helped shine a guiding light on the rest of his life. Dave Scott, Doug Leeck and Terry Clark were the three he showed kudos to for their ability to form strong bonds with their students.

The 1989 Benton High grad said a happenstance invite from Scott to an open house and tour of the Agriculture facilities kickstarted his interest. The tour was convincing and set Kern on a new path. He changed his major to agriculture, and now nearly three decades later he is sitting at the top of his profession. Kern also took part in birth of a new program at the College — the “RLC Agri-Achievers” — who represented RLC and its Ag program throughout the local high school districts.

In his role as CEO, Kern oversees finances and builds relationships with new and existing businesses. Founded in 1978, Schirm USA is a leading contract formulation and storage company for the chemical industry, specializing in agricultural as well as household and garden products. U.S. operations are headquartered in Ennis, Texas where Kern commands 200 employees and annual revenues of $25-28 million. Kern has three children, — a 5-year-old daughter, 10-year-old son and 19-year-old son — with his wife Judy.  And home is still Whittington, Ill., Kern said. His parents, Dennis and Mary Kern, live there on the family farm. 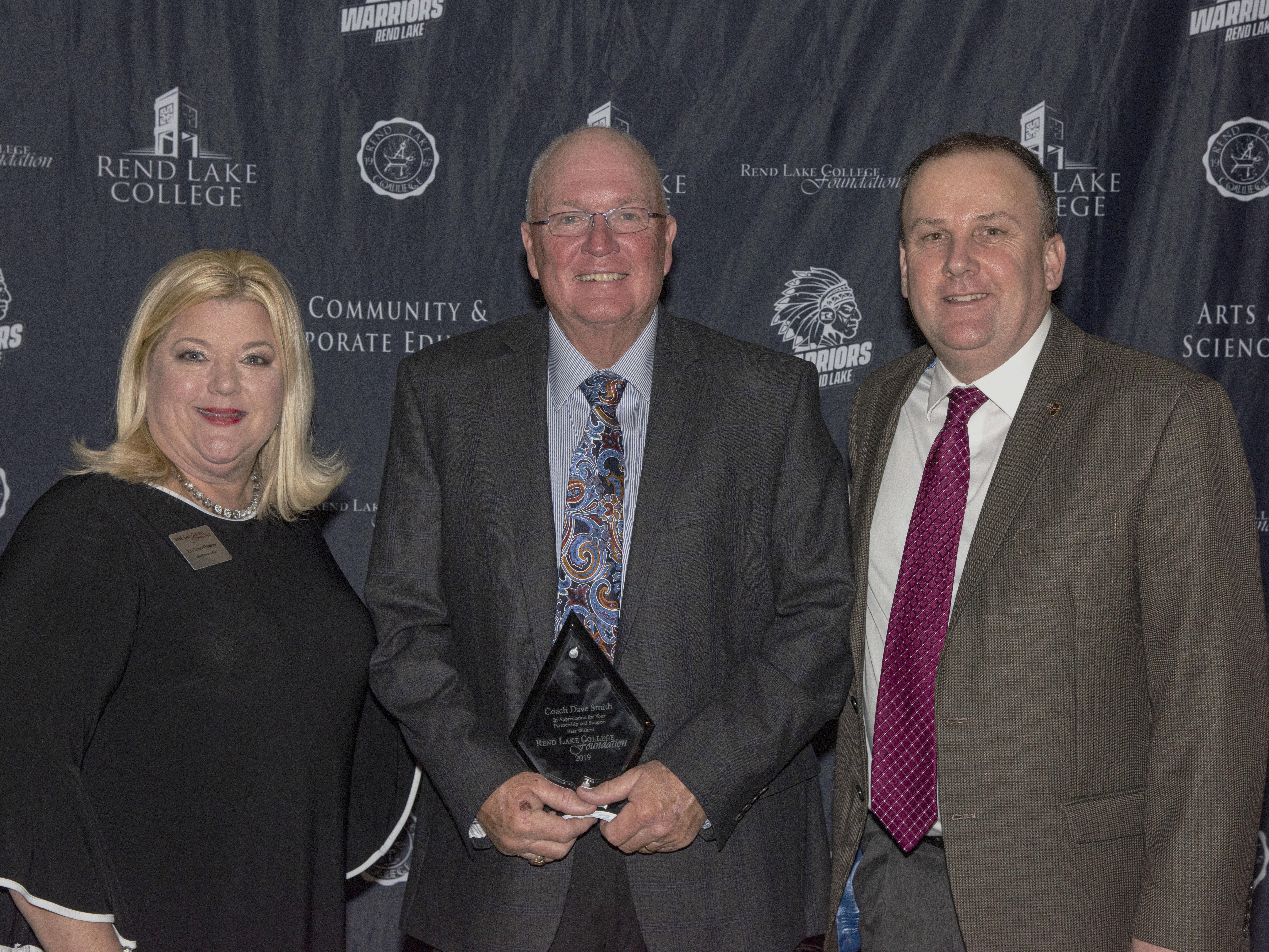 Former golf coach Dave Smith earned special recognition for his longtime tenure on the college’s golf team and his support of the RLC Foundation’s Annual Golf outing. Efforts are underway to set up a scholarship in Smith’s name.

Rend Lake College Foundation CEO Kay Zibby-Damron said she was looking for a way to pay tribute to Smith, who was instrumental in growing the RLC Foundation’s annual golf outing to one of the biggest golfing events in southern Illinois. She met with several of Smith’s former student-athletes to talk about the potential scholarship to see if there would be interest.

“Every time I met with an alumn and shared my idea I was met with ‘Yes, absolutely,’” Zibby-Damron said.

Smith recently retired after coaching the Men’s Golf Team for 30 years. During that time, Smith captured eight total Region XXIV Division II Championships, seven of which occurred consecutively between 1994 and 2000. Smith also earned seven Region XXIV “Coach of the Year” awards. He has coached 13 All-Americans and an individual National Champion, while his teams have competed on the national stage 14 times. Smith, and his team, finished second in the nation twice, third twice, fourth once, fifth twice and sixth twice.

But Smith said it wasn’t all about the golf — that was just part of it. After Smith and the audience watched a tribute video of numerous former golfers giving their thanks and well-wishes to Smith, he said he was most proud of their success after they left Rend Lake College.

“Every one of these people that I’m looking at here went on and graduated and that was my goal,” he said. 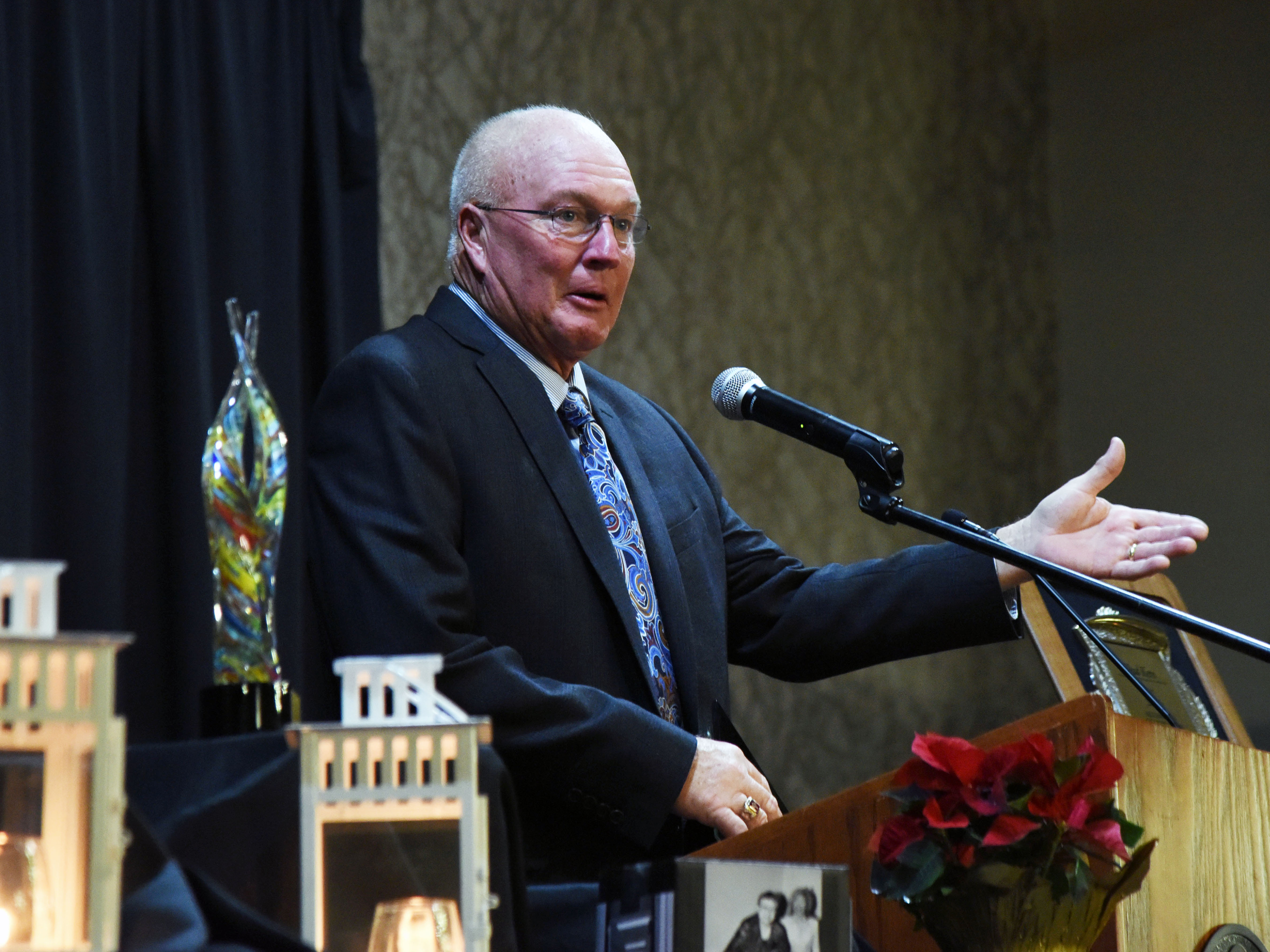 Smith started at RLC in 1981 as an instructor and spent several decades teaching welding technology at the college. In 2017, he was named one of Rend Lake College’s 50 Influencers for his years of teaching and coaching at RLC.

Current plans are to create an endowed scholarship in honor of Coach Smith.  Once created, the Coach Dave Smith RLC Men’s Golf Scholarship will be awarded to a Warrior Men’s golfer each year in perpetuity. The goal is to raise at least $10,000 to start the scholarship, but the good news is after only a few months of fundraising, the Foundation is more than halfway to their goal.

All donations to the Coach Dave Smith RLC Men’s Golf Scholarship fund are tax deductible and can be made by contacting the RLCF at 618-437-5321 Ext. 1214 or emailing . Donations may also be made online at rlc.edu/give-now. 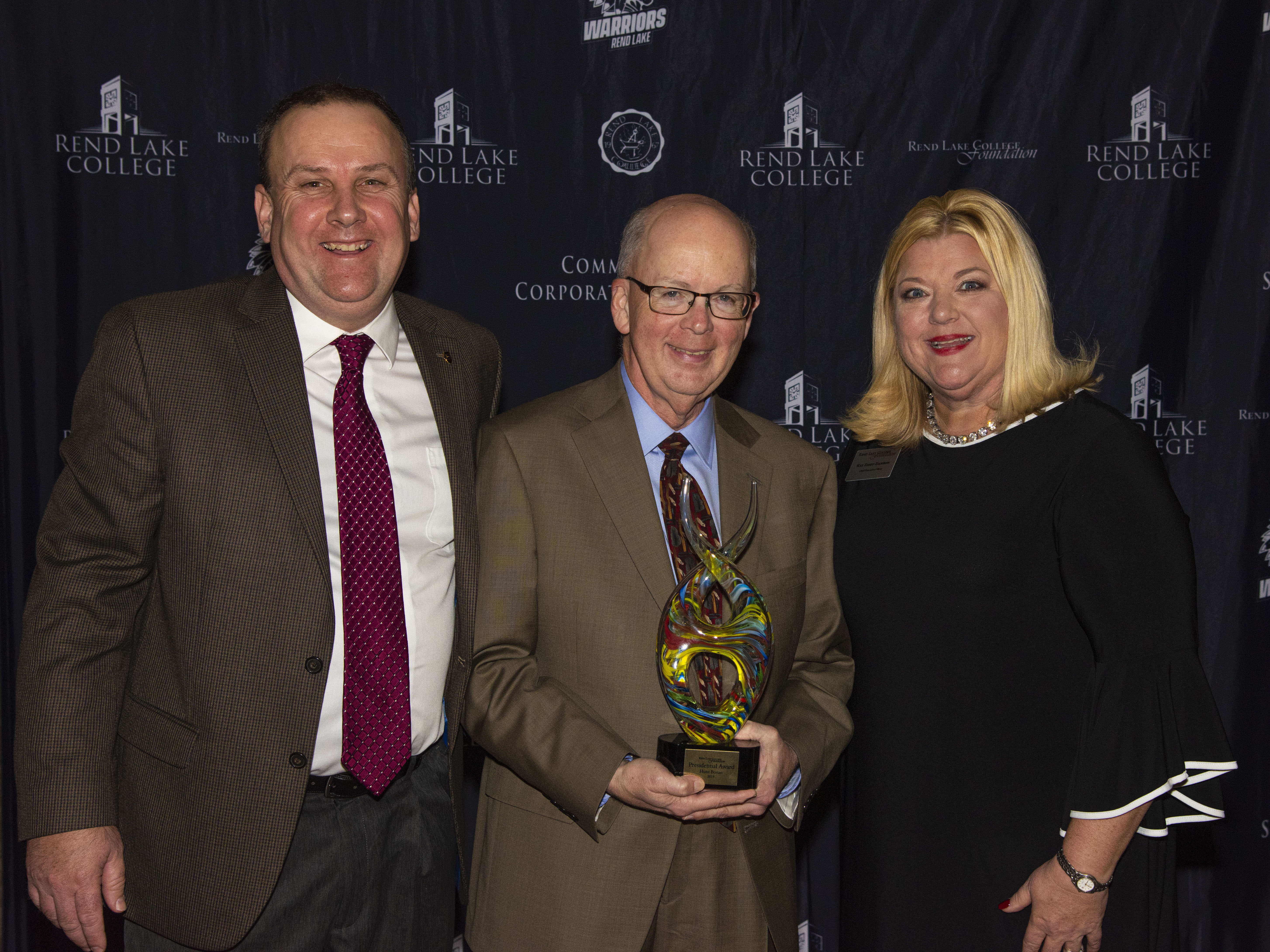 For his more than three decades on the Rend Lake College Foundation’s Board of Directors – among numerous other contributions — Hunt Bonan earned the Foundation’s Presidential Award.

Bonan, who started in the position in 1988, is still serving Rend Lake College and its students in his role as the director of the board where he has shown unwavering support and generosity during his tenure.

“Of all the institutions in southern Illinois, I don’t know of any institution that impacts the region in a more positive way than Rend Lake College,” Bonan said.

From these positions, Bonan was able to help lead numerous initiatives to help the college, including the RLC Generations of Excellence campaign, the RLC Foundation Children’s Center campaign (also the campaign for the center’s addition), the Music Program Renovation campaign, and the current Campus Learning HUB campaign.

And this isn’t the first time Bonan has been recognized for this immense body of work — this will be the second time he takes home the Presidential Award. He was one of four initial recipients of the award in 1995, along with Mildred Fitzgerrell, Richard Garner and Howard L. Payne. He was also the first winner of the Hourglass Award in 2009 for his lengthy commitment to the College’s Foundation and its students. In 2013, he was again recognized at the RLC Foundation Annual Dinner for his 25-year tenure. And finally, in 2017 Bonan was recognized as one of Rend Lake College’s 50 Influencers.

“I will always continue to be a believer in Rend Lake College,” he said. “Keep on giving. Keep on supporting the college. It's a wonderful institution.”

Bonan’s contributions to the community don’t stop at RLC. He’s also served on the Illinois Bankers Association (IBA) Board of Directors, serving as Chair in 2004; the Jefferson County Illinois Economic Development Corporation as a board member and officer; the Hamilton Memorial Hospital Foundation Board, the Board of Trustees for Cedarhurst Center for the Arts and the SSM Health Good Samaritan Hospital Foundation board.

Bonan currently serves as Chairman of the Board of Peoples National Bank and was named Illinois Banker of the Year by the IBA in 2012. 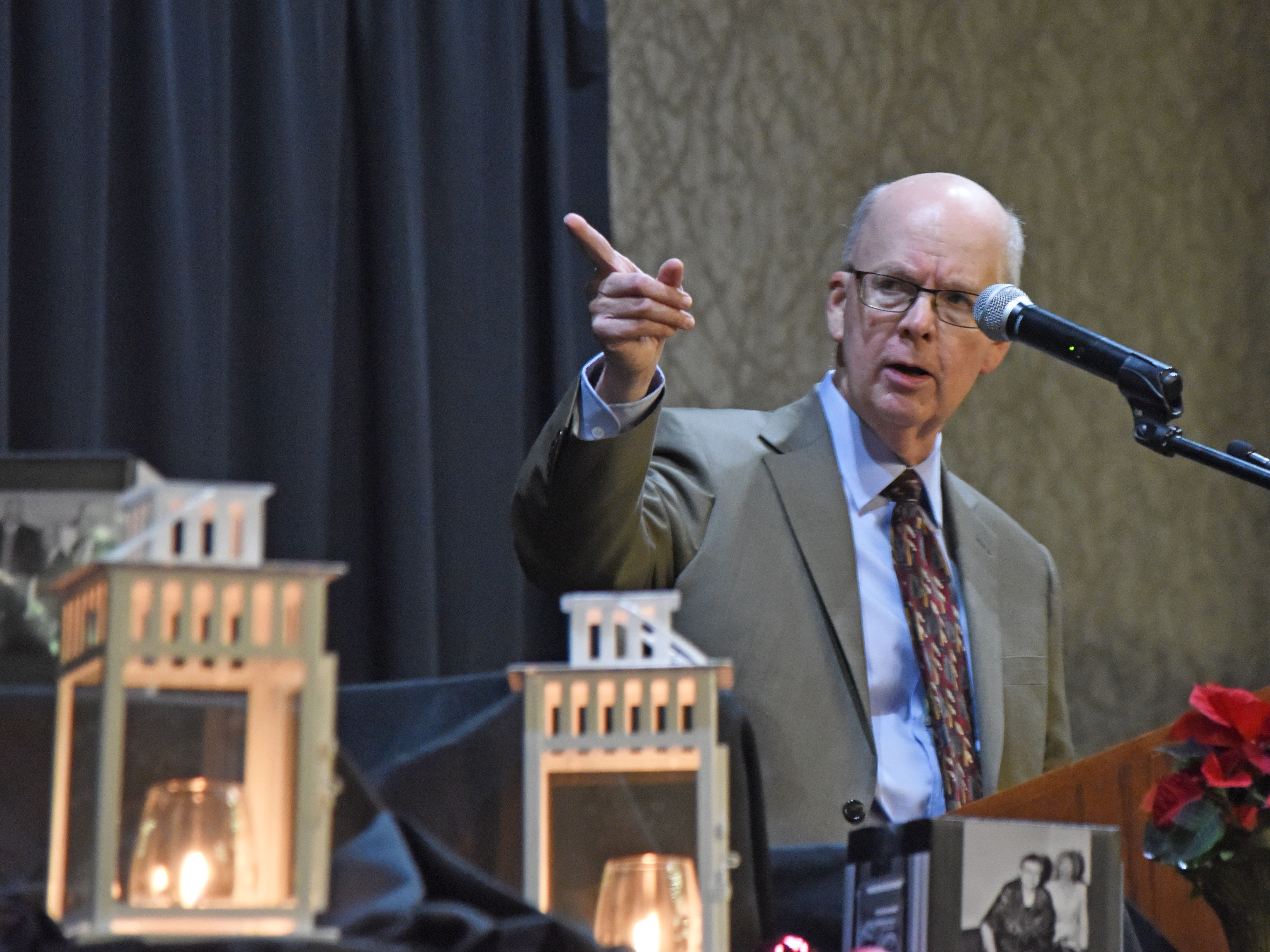 A new campaign is underway at Rend Lake College to make the Learning Resource Center the school’s hub of activity and learning.

The project, aptly named The HUB campaign, was announced at Thursday’s Annual Dinner with a $500,000 goal in mind. But the good news is the Foundation has already raised about 75% of that funding in just a couple of months.

RLC Foundation Board Director Pat Kern shared the campaign was started with a significantly generous lead gift from Foundation Emeritus member George and his wife Mary Slankard, who have been longtime friends of RLC. Kern said the Slankard’s and other unnamed major donors will be recognized at a special event when the project is completed.

The project will help expand the Learning Resource Center in a variety of ways, including a beautiful façade and outdoor student study area in the front of the Center. The new façade will be part of an entryway that ties the main entrance to the center of the campus. The plans also include expanding floor space in the Learning Resource Center and creating six collaborative learning/study rooms across the front of the library for both individual and group study. The Career and Technical Education Success Center and CTE Computer Lab are getting upgrades as well. The Success Center and Computer Lab will be transformed into a more modern learning space to help support students seeking tutoring and other resources for the school’s technical programs – the cornerstone of Rend Lake College. And finally, the Children’s Library area will be enhanced to provide a more robust space for future Rend Lake College Warriors to read and learn.

But the Slankard’s generous donation is just the start of the campaign to make this all happen. If interested in helping The HUB Campaign become a reality, contact the RLC Foundation at 618-437-5321 Ext. 1214 or email . Donations may also be made online at rlc.edu/give-now. The names of all the donors who contribute at the $5,000 level or above will be listed on a beautiful recognition tribute prominently located in the Learning Resource Center.

Kern said once that last $125,000 is raised, a groundbreaking date will be announced as soon as possible.