Mr. A Day celebrated on the RLC campus 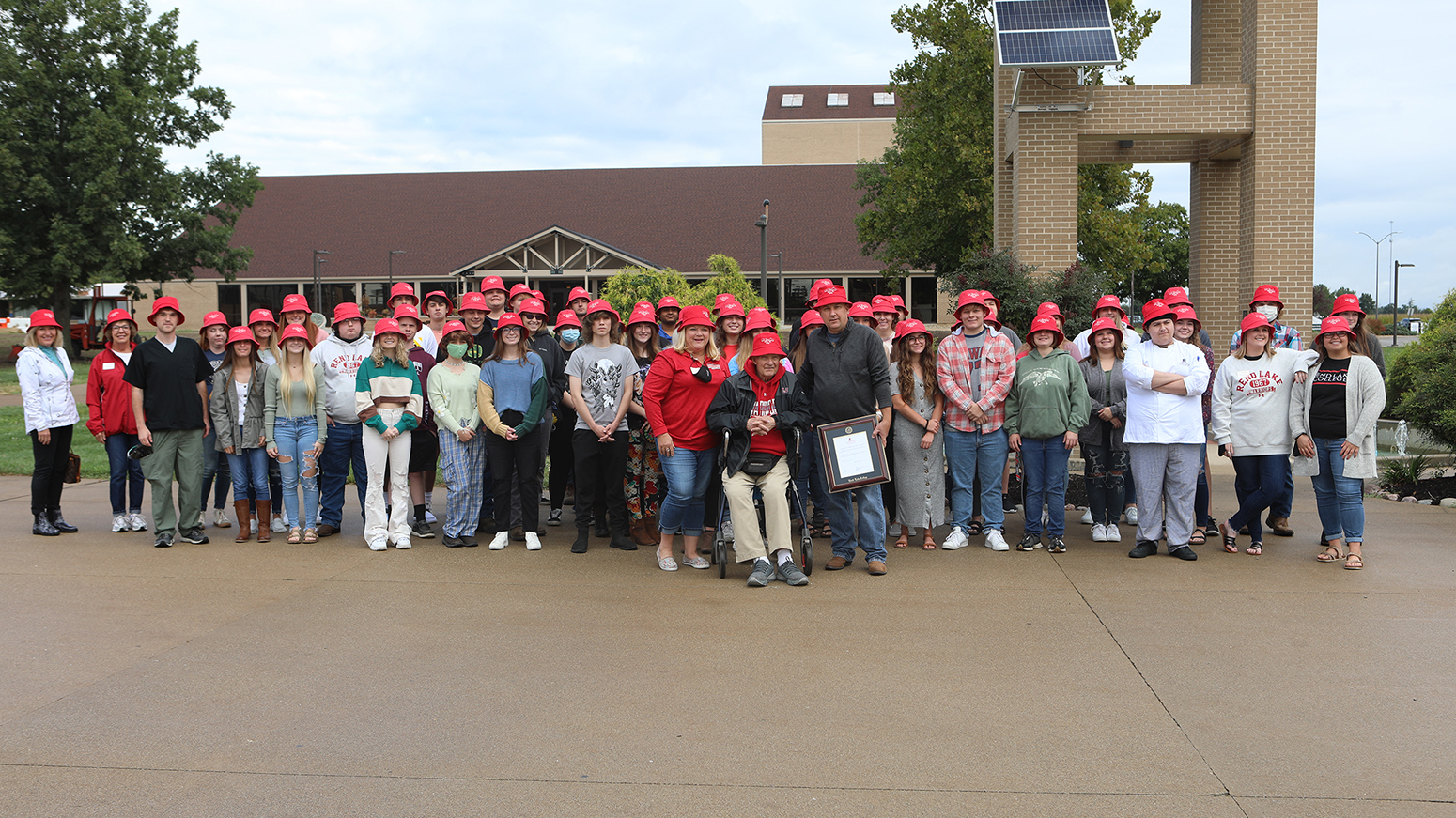 RLC faculty, staff and members of the community join scholarship winners join in celebrating Gene "Mr. A" Alexander on Wednesday during the first Mr. A Day. (Click image for printable photo)

INA, IL (Sept. 24, 2021) – Gene “Mr. A” Alexander is someone so special that he only has to be referred to by one letter to be recognized. And now he has been awarded with his own day at Rend Lake College. At the September Board of Trustees meeting, the RLC Trustees passed a resolution naming September 22, 2021 as Mr. A Day to acknowledge his dedication and significant support to RLC students.

The “Mr. A Day” celebration was held Wednesday afternoon on the RLC campus, where students, faculty, staff and community members came out to meet, greet and show their gratitude toward the longtime educator and Benton native for all he has done to help promote educational pursuits for local students. Lunch was provided by the RLC Foundation.

“It was quite a surprise,” Alexander said. “I got a chance to meet a lot of students and talk with them. It’s been a great day.”

Since 2017, Mr. A’s generous contributions have helped more than 350 students with scholarships, initially set up for Benton High School graduates, and now expands to RLC students from Franklin County.

“Mr. A is simply amazing. He is always looking for ways in which he can help, because he has never forgotten how he was helped along his educational journey. Mr. A’s impact on his corner of the world is so significant and has been such a blessing to RLC and our students.” said Kay Zibby-Damron, CEO of the RLC Foundation.

RLC President Terry Wilkerson said it is hard to put in words the difference Mr. A’s contributions have made in the lives of hundreds of RLC students.

“Mr. A personifies paying it forward,” Wilkerson said. “He has given his life and his investments. He didn’t spend it on himself. He spends it on the kids and the future. You want to see it in action and see it in person. You can actually see it in him. It’s hard to put into words what he is doing for our students and what he’s doing for this college.”

Several RLC students donned specially made red bucket hats to pay tribute to Alexander’s special style. They were also given the chance to thank Mr. A in person for helping them start their academic journey.

Audrey Gulley, a freshman from Sesser who is studying political science and pre-law, said she felt honored to receive one of Mr. A’s scholarships this year. She said because of the support she has received from financial awards, she has been able to save up for her first year of law school.

“I really appreciate everything that he has done for the community,” Gulley said. “Education is really important to my family and for me as a second-generation college student. People like Mr. A help me to be able to go to school and pursue my passion.”

“It makes you feel like you have got people rooting you on, someone to support you and someone who wants you to finish school and get your degree,” said Reed Raubach, a sophomore from Thompsonville studying IT security.

Alexander said he is glad he is in a position to help so many people. Recently, Mr. A made a large contribution to his existing endowment, to ensure the young students at Benton Elementary School will have scholarships when they come to RLC. “This is just another example of how Mr. A’s generosity will impact future generations,” said Zibby-Damron. 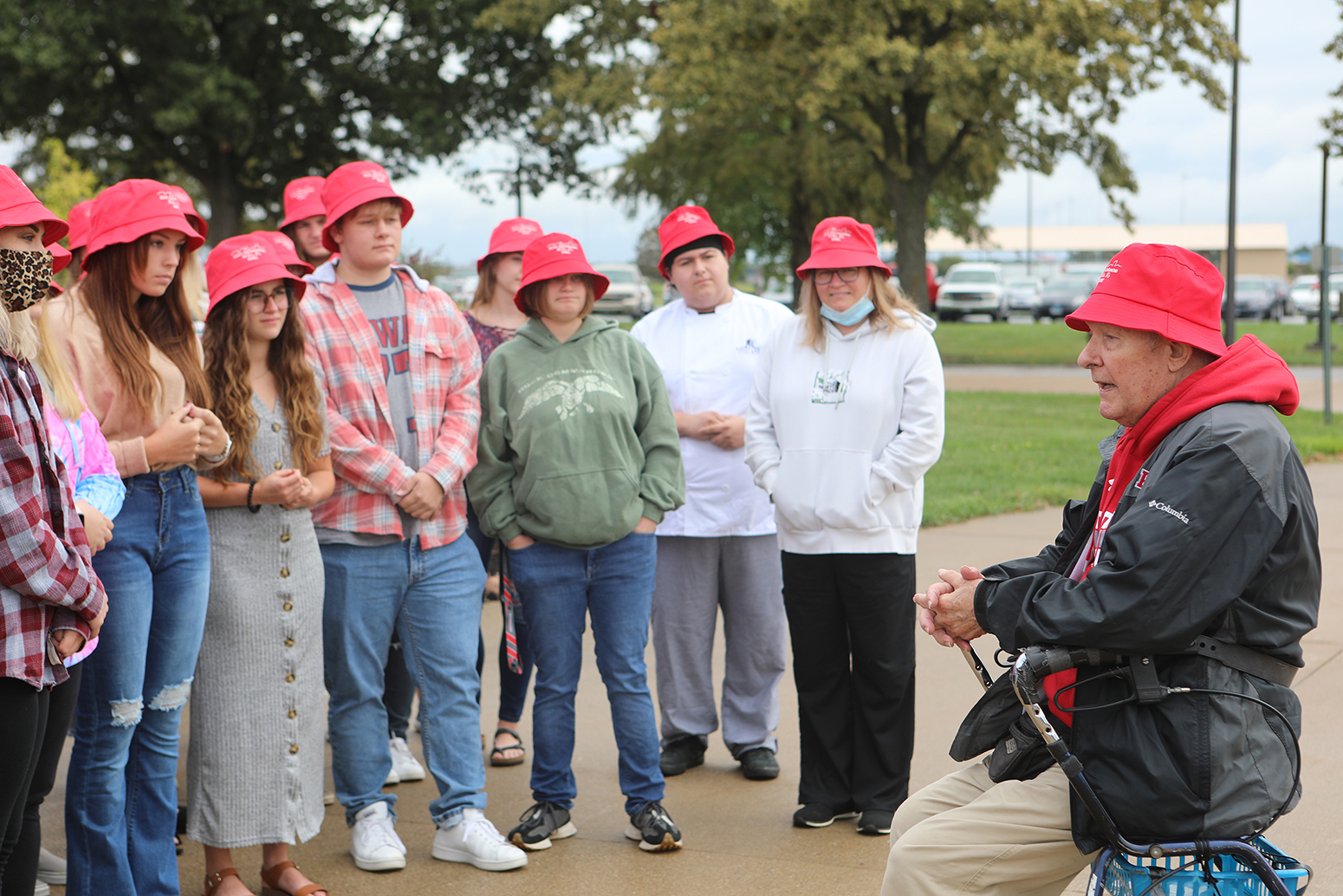 A group of scholarship recipients listens as Gene "Mr. A" Alexander discusses his start in education during the Mr. A celebration on the Rend Lake College campus. (Click image for printable photo)

Watch a video from Mr. A Day here.