Received ICCB data indicating Rend Lake College experienced a greater growth rate in full-time student equivalency (FTE) from Spring 2000-2004 -- 42.8% -- than any other Illinois community college save for nearby Kaskaskia College and ranked fifth overall during that same period in terms of student headcount increase at 39.5%, behind Kaskaskia, South Suburban, Carl Sandburg and Olney Central. The Rend Lake College headcount for Spring 2004 of 3,756 students translates into a full-time equivalency rate of 2,235. There are 48 college campuses which comprise the statewide system.

Approved revisions to the Associate in Applied Science Degree program of study in Architectural Technology and authorized the curriculum's submission to the Illinois Community College Board (ICCB) for action. Also approved four related courses for consideration -- Architectural Drawing; Architectural Building Technology; Architectural Engineering Project, and Architectural Documents and Estimating -- and one other course related to the Therapeutic Massage program (National Certification Exam Review).

Lease agreement will lead to purchase of three buses

Approved entering into a municipal lease and option agreement with Old National Bank for the purchase of three multi-purpose standard school activity buses from Central Management Services. The cost of the 2004 model buses is expected to be approximately $105,000. The five-year lease in the amount of $100,000 is based on a 3.80% annual rate of interest, with the total cost at $109,980. According to administrative rationale provided, "Due to potential safety concerns and insurability issues . . . it would be in the best interests of Rend Lake College to retire a portion of our current fleet of 15-passenger vans and to replace them with 14-passenger multi-purpose standard school activity buses."

Learned Adam Nagreski of Benton will be joining the Board next month as the newly elected Student Trustee following recent voting on campus.

Approved revisions to Administrative Procedures regarding the areas of Stipends and Fees . . .

** A $3,400 stipend was added for the Teacher-Summer PreK Program. This position would be in relation to a grant Rend Lake College has received from the Illinois State Board of Education to offer a PreK program for the children of the district who are between the ages of 3-6. The grant is for a period of 36 weeks; the stipend would be for a period of eight weeks not covered by the grant.

** Lab fee changes were revised to reflect Learning Resource Center lab fees "to meet current needs and to make charges much simpler" and lab fees for three new Architecture classes that have been developed.

** Revisions also were made to Procedures for Use of Van.

All are completing their third year as faculty members and received positive evaluations from immediate supervisors. The granting of tenure becomes effective August 17.

Approved new Fiscal Year 2005 contracts for four full-time employees of the RLC Foundation Children's Center due to a change in the facility's operating schedule . . .

The first three are on full-time, 45-week, nontenure-track contracts, while Clouse is on a similar, 37-week contract. The new contracts are effective beginning July 1.

** Accepted with regret the resignation of Counselor Monica Clark, whose last official day will be April 14. She cited family responsibilities as the need to relocate.

** Accepted with regret the resignation of Christy Hamilton, Youthful Offender Coordinator for RLC at the Pinckneyville Correctional Center, effective March 22. She has accepted a position with Southern Illinois University.

** Accepted with regret the retirement of RLC Golf Outlet Manager Tom Mikutis, which will not go into effect until April 30, 2005.

Other personnel decisions include Business hiring

** Learned of the recent hiring of Christine Cochrane as Administrative Assistant for the Center for Business Services, effective March 11.

** Contingent upon approval by the Illinois Department of Corrections, granted an unpaid leave of absence to Mary Stark, Director of Correctional Education for Big Muddy River Correctional Center in Ina, for the period of March 11-26. Plans call for her to return to work March 29.

** Accepted the resignation of Custodian Alan Elliott, effective March 2, and ratified a voluntary separation agreement with him.

Learned the college has been awarded grant funding of $36,800 from the Illinois Department of Commerce and Economic Opportunity (DCEO) under the "Eliminate the Digital Divide Grant Program." The local grant will assist area residents in obtaining the computer-related skills needed to compete in the emerging digital economy. 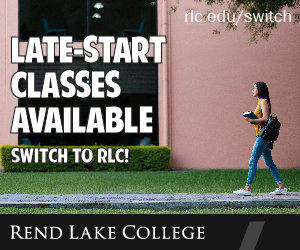