MT. VERNON, Ill. (Dec. 20, 2013) – Teamwork was the word of the evening for the recognitions and presentations featured at the Rend Lake College Foundation Annual Dinner held recently in Mt. Vernon.

The recognition of Alumnus of the Year Trish Reed (West Chicago), introduced by RLC Foundation CEO Shawna Manion, kicked off the program.

“Trish values her alma mater, her first alma mater just as much as her second,” said Manion. “She hasn’t forgotten her start and Rend Lake College is proud to announce her as our Alumnus of the Year for 2013.”

Reed, originally from Scheller, attended RLC from 1985 through 1987. She majored in finance and played for the Lady Warriors under Coach James “Hummer” Waugh.

“When Shawna first told me about this honor, I was speechless, and I’m not speechless very often,” said Reed. “That moment was a ‘wow’ moment, but I am more appreciative of the ‘ah-ha’ moment that my experiences at Rend Lake College have brought me to. When I decided to get involved with RLC again, I contacted Shawna, and within a month, I was on my first trip back to Rend Lake College since 1987.” 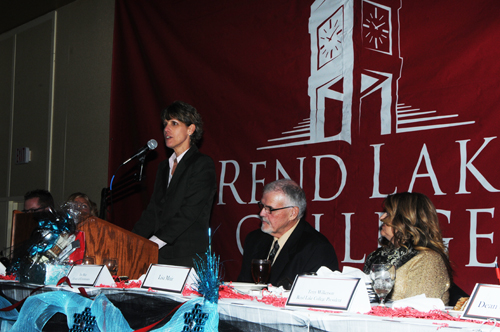 Talks of teamwork
Trish Reed, STANDING, 2013 Rend Lake College Alumnus of the Year, addressed the attendees of the RLC Foundation Annual Dinner last week to talk about her experiences in college and playing for the Lady Warriors basketball team. Also pictured is Master of Ceremonies Jim Muir, CENTER, and his wife Lisa, RIGHT. Click on the image for a larger view.
(ReAnne Palmer / RLC Public Information)

Reed added it was the lessons she learned on the floor for the Lady Warriors that have been the longest lasting for her career.

“In 1985, I was a typical Southern Illinois student. My father worked in a coal mine and my mother worked in a factory. I was enrolled in college and I was concerned with how to pay for it,” she said. “I spoke to Coach Waugh, and he opened up an opportunity for me to play basketball and pay for college at the same time. Because of that, I grew as a person while at Rend Lake College and the life lessons I learned as a Lady Warrior are invaluable.”

Coming from playing basketball at Waltonville schools, Reed said it was a big dose of reality her first time with the team.

“I was what we call a big fish in a small pond, and upon coming to Rend Lake College, I found that I was now a small fish in a very big pond,” said Reed. “It was a humbling experience for me, but it’s one I wouldn’t trade for anything. I learned that what doesn’t kill you makes you stronger, and Coach Waugh helped me understand what my role was, despite how many minutes I played. He took a gamble on me, and in the spirit of paying it forward, I’ve taken a gamble on people at Navistar and it’s helped me tremendously.”

Going along with the teamwork theme of the night, Reed added it was both her instructors and her basketball team who helped her succeed.

“I had the freedom to fail, but I had the support of my instructors, my coach, my team and my family to succeed,” she said. “Obviously teamwork was a huge part of my time at Rend Lake College, and I think teamwork is a very important attribute. I’m proud to be a part of the team that is the Rend Lake College Foundation and it’s been a pleasure working with Shawna. Overall, I want to support the impact that a junior college had on my life and the great impact that Ina, Illinois, can have on students in the future.”

In addition to being the Alumnus of the Year, Reed also created an endowment in memory of her father. The C. H. Reed Memorial Scholarship will be available to students in the fall of 2014. 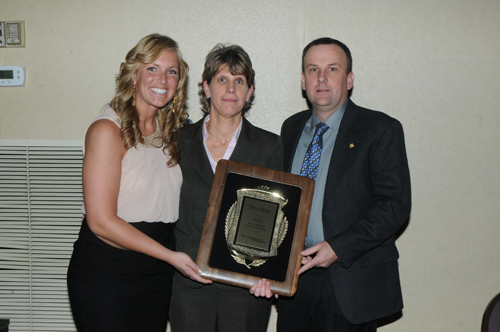 After her speech, Waugh took to the podium for a surprise congratulations to his former player.

“I just wanted to say congrats to you on all the accomplishments you’ve had in your life,” said Waugh. “I knew when Trish came to me that she would do terrific things. She is a great people person and she had a very strong work ethic. She was a good teammate, well respected and liked by everyone on the team.”

Two Rend Lake College programs also were highlighted for their teamwork, including the Allied Health Division and the Mining Technology Program.

RLC President Terry Wilkerson said of the two programs, “When we have such great partnerships, we’re standing on the shoulders of giants in our communities. They’ve been about doing what we need to do and doing it right.”

In connection with the Mining Technology Program, the announcement of six new scholarships for coal mining students was made by Master of Ceremonies Jim Muir. The Timothy Keith Chamness Memorial Scholarship is named in honor of Tim Chamness, who died on Feb. 13, 2013 in a mine accident at Prairie Eagle South Mine.

“While nothing can replace the grief of losing a child, these scholarships are turning some of that grief into generosity and tragedy into triumph. They’re providing opportunities to students, and they will be a great and lasting legacy for Tim,” said Muir, also a former coal miner.

Jim Chamness, Tim’s father and guidance counselor at Zeigler-Royalton High School, spoke on behalf of the family and the scholarship.

“We decided that we want to keep Tim’s name and memory alive in the form of a scholarship,” he said. “There are many generous people out there, including Carter, the president of Knight Hawk Coal Company. He and the employees of the mine donated their $500 safety bonus for the quarter to the scholarship fund. They allowed us the opportunity to turn that $60,000 into an endowment with the Rend Lake College Foundation, and hopefully, it will help other students. We want to help the children of the Rend Lake College district and many more students in the future.” 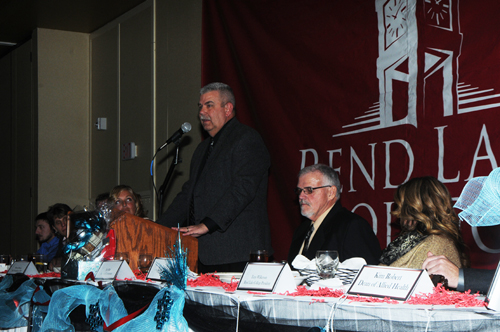 Memorial Scholarship to help future students at RLC
Jim Chamness, STANDING, father of Tim Chamness, spoke during the Rend Lake College Foundation Annual Dinner last week about the recently established Timothy Keith Chamness Memorial Scholarship in honor of his son who died in a mine accident last February. The scholarship will provide funds for six students starting in the fall of 2014. Click on the image for a larger view.
(ReAnne Palmer / RLC Public Information)

Two final honors, both surprises, were awarded to two of the longest members of the RLC Foundation Board of Directors: Hunt Bonan and Rich Yunkus. Bonan has served on the board for 25 years and Yunkus for the past 20 years.

“Rich manages investments for the Foundation, and he works tirelessly to do the best for us. I guarantee he thinks about the Foundation daily,” said Manion. “He is also the all-time high scorer at Georgia Institute of Technology with 2,232 points, a record that still stands over 40 years later.” 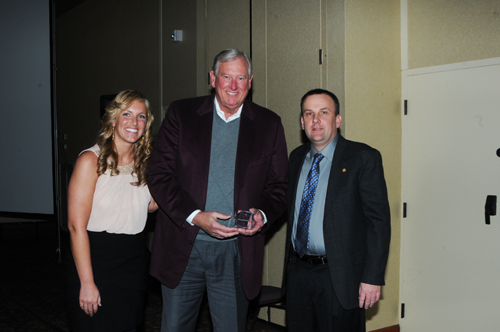 Yunkus thanked the Foundation for the award, stating, “You can’t help but see the Rend Lake College Foundation when you walk around campus. What a great group of people, and I love to work with all of them to help Rend Lake College. It’s with everyone’s help and support that we do what we can, and it’s an honor to be a part of this tremendous organization.”

Wilkerson honored Bonan with the award as a personal friend and mentor.

“It’s a great honor to receive this tonight,” said Bonan. “It’s amazing how many people Rend Lake College and the Foundation support. If you ever think the world is going bad or going the wrong way, come sit by some of the students at our Annual Scholarship Dinner, and you’ll leave thinking positive thoughts about them and the future.” 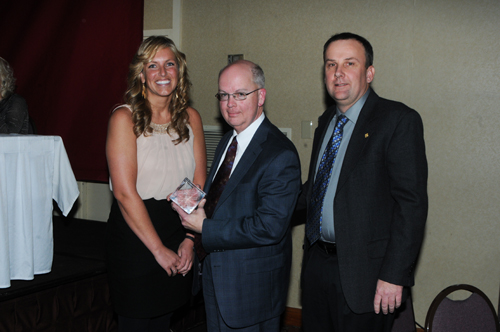 The annual dinner, which had been rescheduled due to inclement weather, originally was to feature the RLC Warriors Basketball team for their National Championship win last year; however, the Warriors were playing against the Danville Area Jaguars in Ina that evening, a game they won 70-69.

Throughout the evening, musical entertainment was provided by the RLC Community Orchestra and Choir, and singer Juanita Jones. The event was sponsored by Hamilton County Telephone Cooperative and Peoples National Bank.