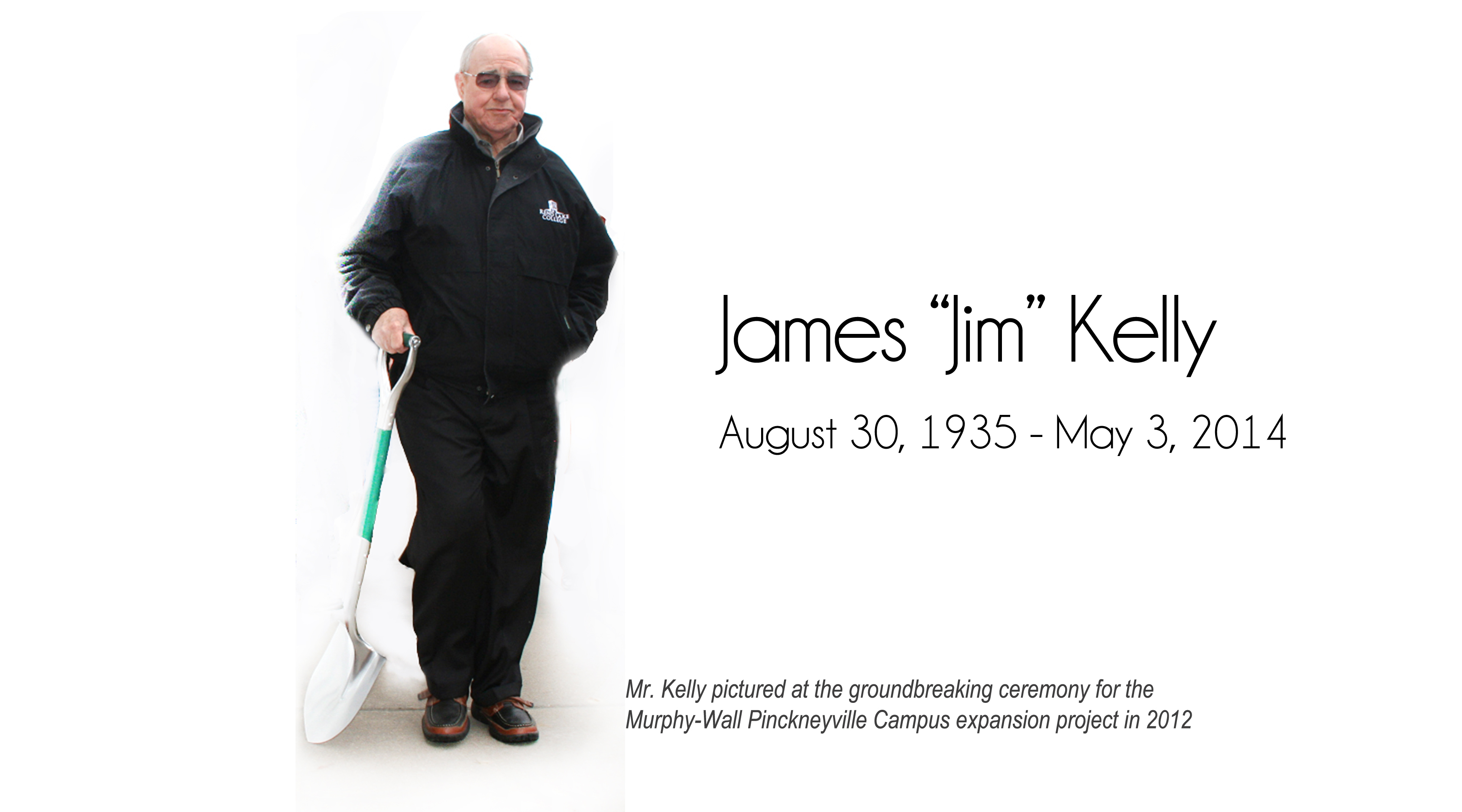 INA, Ill. – Rend Lake College is mourning the loss of one of its
biggest supporters, Jim Kelly. The retired Sesser banker of more than
30 years, and former chairman of the Rend Lake College Foundation
Board of Directors, passed away Saturday night at Memorial Hospital in
Carbondale after a brief illness. Kelly was 78.

Kelly went to college when it was rare for a high school graduate to
do so. Enrollment was just beginning to bulk up at post-secondary
institutions across the nation. Federal scholarships and low-interest
loans for college students wouldn't be created by congress for another
decade. The G.I. Bill had been around for a little more than 10 years
and Kelly was a veteran of the U.S. Army.

He graduated from Sesser’s Goode-Barren Township High School in 1953,
just before the Illinois Community College Act came along to establish
junior colleges in Illinois. Kelly never got the chance to attend a
community college. He earned his bachelor’s degree in social studies
from Southern Illinois University in Carbondale, but always wondered
what kind of teacher he would make. During an interview in 2012, he
said he felt a calling to the profession. But life presented a
different path.

“I got a chance to go into banking. So, I thought, well, maybe I
better go there,” he said. “I always knew the importance of education.
I stress that. I’ve got two grandsons ... and I told them, ‘You are
going to have to study and get good grades so you can get a
scholarship to go to a good school. Grandpa may not be around.’ He
laughed, adding, “College is important. In my time [many] people
didn’t go to college, but that was when college really began.”

Kelly recognized that graduate degrees aren’t for every student and
that skills learned right at RLC are, in many cases, enough to earn a
great living.

“The thing of it is ... we have welders who make $50,000 or $60,000 a
year. You really have to go all the way to a doctorate before you can
earn more than that. And you have to be pretty smart to be a welder.
The importance of education is getting greater all the time and the
vocational even more so, I think. But, it’s according to what a man or
woman wants to do.”

When he joined the RLC Foundation Board of Directors in 1995, the
Foundation was in the second year of a two-year capital campaign
called “Generations of Excellence,” spearheaded by local businessman
Sam Mateer. Over the next 10 years, the Foundation continued to put
local giving to good use with the construction of the indoor Aquatics
Center that’s attached to the gym, the RLCF Children’s Center on the
northwest corner of campus, and the Murphy-Wall Pinckneyville Campus.

In 2012, Kelly said of all the campaigns and construction projects
over the years, the expansion that year to the satellite campus in
Pinckneyville came to mind as being a very significant step forward.

“That was one of the best moves we made,” he said. “We furnished the
money for [the college] so they could go ahead and finish it up.”

He said board member Rich Yunkus played a big part in recognizing the
need to provide a complete degree program at the MWPC and eliminate
the cost students take on from the trip to Ina and back.

“Rich said, ‘That’s what our Foundation is for, to furnish money for
kids and for such endeavors,’” Kelly explained.

When Kelly took over as chairman in 2008, the RLCF was beginning the
“Friends of the Theatre” campaign that brought a major renovation to
the facility on campus. Board member Mary Ellen Aiken championed that
cause, according to Kelly.

“She was instrumental in getting that taken care of,” he said. “It’s
fantastic how the college has been supported by so many people. I
think people are motivated by the number of scholarships we offer and
are offered by various businesses and individuals in our area. And I
think they understand that scholarships aren’t the only way to help.
They can be a part of helping the college by giving to various
campaigns.”

After serving five years as chairman, Kelly handed the gavel to Ed
Cunningham in 2013. Kelly returned to his seat as a regular member of
the RLCF Board.

“Jim serves as one of my earliest memories from RLCF as he always went
out of his way to make everyone smile and feel welcome,” said RLCF CEO
Shawna Manion. “His dedication to RLC and our students serves as a
model for directorship, he will be remembered for his service at RLCF
and in his community.”

Kelly said it is important that RLCF leaders continue to be
transparent on what projects are in the works and how the money is
being used. He was asked to join the board by a previous member. At
first, he said, it seemed like a challenge he didn’t need to take on.
But after taking a look around, he decided it was good company – a
dedicated group that would get some things done for local education.
The RLCF Board has always been made up of high-caliber leaders from
local communities. The current board is an excellent example of that.

“A lot of these people on here now weren’t here when I first started,”
said Kelly. “Right now we’ve got some of the most intelligent people
in the area serving on this board. We’ve got some top-notch people.

“It’s growing all the time,” said Kelly. “I think the future is great
for the college and the Foundation.”

Kelly’s visitation will be held from 6-8 p.m. Tuesday, May 6, at the United Methodist Church in Sesser. Funeral services will be held at 11 a.m. Wednesday, May 7, at the church.