Mr. A shares his ray of sunshine with RLC students

Gene Alexander, affectionately known as “Mr. A,” has spent the last 59 years making a difference in the lives of local students. He’s done it in two installments, first during a 32-year career as a local educator and principal and then again in the 27 years since his retirement where he makes daily pilgrimages to local schools and head start programs to read and interact with the youth.

In his own estimation, Alexander has touched the lives of some 22,000 kids though his nearly six decades of serving the educational needs of Benton and surrounding communities.

Alexander lived the first few years of his life in Ziegler, son of a local coal miner. But, the family packed up and moved to Benton when he was in third grade, and he’s basically stuck around ever since. He frequently discussed how the family was not well off financially growing up, and that spurs many of his charitable endeavors today.

After graduating Benton High School, he traveled south to Carbondale to attend Southern Illinois University, earing both his bachelor’s and master’s degrees there. During that time in his life, he also spent two years in the Army.

Following a few years away, Alexander wished to return home to Benton. It just so happened that there was a teaching opening at the junior high school.

As a young man, Alexander wanted to become a teacher. While growing up, his pastor had challenged him to teach Sunday School. The experience left such an impression on the young man, he wanted to spend the rest of his life helping and educating others.

“I walked into the junior high, and the principle asked if I could count to 10. I said that I could, and he told me I was the new math teacher,” chuckled Alexander. “I ended up teaching math there for about three years. I spent about seven years there in total.”

Following his stint at the junior high, Alexander transitioned into the principal’s role at the old Lincoln School in Benton. He was there for a handful of years before a school strike caused him to resign from his position to take the side of the teachers.

“I tried every way I could to alleviate the situation. But, it was no good. So, I went back to teaching for another few years. Then, I wound up becoming a principal again at Grant School. I didn’t spend long there. I didn’t like that very much. So, I went be principal at Logan School. I spent 10 years there, and that’s where I retired from. That school used to be out by the Benton Evening News office. It’s an empty field now.”

According to Alexander, mounting health issues caused him to step away from the classroom after 32 years. Numerous aches and pains, coupled with the stress of teaching, had taken their toll. Alexander said that was a very difficult decision for him, but ultimately, it was out of his hands.

About a year later, his health started to return, and with it, so did his desire to get involved.

It was at that point, that Alexander began his 27-year tradition of reading to local school children and Head Start students every morning, painting classrooms and doing his iconic maps.

“About a year after my retirement, my old superintendent Dr. Allen Patton had this map kit. He approached me about making the map. So, I said that I would give it a try. I kind of got hooked on it after that. Pretty soon, I had made all the maps I could around Benton, so the word started getting out to surrounding towns. Now, I think we are up to 371 maps all over the place.”

In fact, the 82-year-old recently returned from Champaign to complete his latest map.

The maps provide Alexander with the ability to go places he’s never been before and meet people he otherwise would not meet. To date, there are Mr. A’s maps all over Illinois and even a few in Indiana, Kentucky and Missouri. With his long experience and all his travels, Mr. A has seen a plethora of changes in education. He said one of the most positive changes he’s seen in schools is the implementation of breakfast for students.

“We used to have so many students come to school hungry. You could tell they were sitting there wondering how long it was going to be until lunch. That’s been such a big positive change.”

However, Alexander also feels like the family life of many students has deteriorated. He said that’s one of the things that has kept him motivated for so long. He can’t help but be involved and work towards helping students that are coming to school out of negative home lives.

He feels like there is always more to do to make a positive impact. So now, in his 82nd year of life, Alexander is looking to give back even more. Thus, the multitude of scholarships to the Rend Lake College Foundation were conceived.

Alexander said his involvement with the RLCF was born out of frustration.  He had heard of a program in Johnston City where funds were being started for kindergarteners. The program invested money over the course of the children’s lives. When that student came of age, they could then collect what had built up in the fund and use it for things like college.

He wanted to launch a similar program in Benton. Alexander said no one told him no, but none of the individuals he spoke with seemed very eager to join the cause either.

Since he was having trouble investing in young children’s futures, Alexander thought he would go the other direction, reaching out to RLCF CEO Kay Zibby-Damron to establish scholarships aimed at helping graduating high school students begin college.

To that end, Alexander generously donated scholarships to help 18 students get their start at RLC this year and also set up an endowed scholarship to help students in perpetuity. 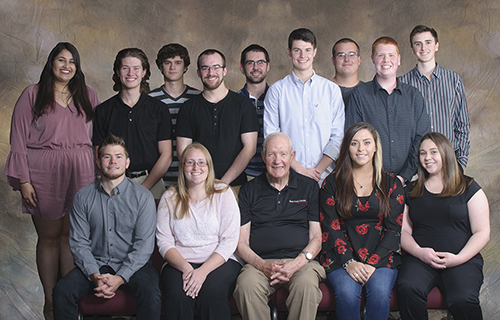 During the recent Foundation Scholarship Dinner, many of his scholarship recipients told him they fondly remembered Mr. A antics.  They shared memories of him teaching them their states and awarding them with pennies for correct answers.

“You only have to spend a few minutes with Mr. A to know that he has heart of gold. He has devoted his entire life to educating and helping others. It is rare to find someone, like Mr. A, who deliberately spends every single day doing good deeds for others. Not only has he so generously provided scholarships to 18 students this year, he has made provisions to help countless students for many, many years to come. It’s been a joy to get to know Mr. A, and I know that Rend Lake College and our community is a better place because of him,” expressed Zibby-Damron.

Initially, Alexander didn’t want the news of his generosity to get out. But, he said that given the negativity in the news, he thought a positive story might help inspire and show some good in the world.

“We need to do what we can to brighten our corner of the world. Everyone seems like they are so depressed. We need some sunshine in people’s lives. I just want to do everything I can do to be a blessing to people. All the stuff happening at the national and state scene can be so depressing, that we need some positivity around here.”

Many would argue that Alexander shines brighter than most.

In addition to being a mainstay at local schools, Alexander is also a frequent volunteer and supporter of the Benton Public Library, to the point that there is even Mr. A-dedicated shelf space, complete with a his service photo and a more recent headshot.

“When I was young, we were poor. This is part of me living out my dreams. Now, I’m able to help out and contribute to the things that are important to me.”

He is also a supporter of the local food pantry, donating his time and resources there once or twice every week, and, along with other helpers, Alexander also collects cans to recycle to raise funds for Habitat for Humanity. So far, he said that the group has combined for 1,300,000 cans donated.

For his numerous contributions, and overall positive impact, Alexander will be honored at this year’s Rend Lake College Foundation Annual Dinner, on Dec 7 at the Mt. Vernon Hotel & Event Center (formerly Holiday Inn) on Potomac Boulevard in Mt. Vernon.

In addition to honoring people like Mr. A, this year’s dinner will highlight Rend Lake College’s 50th Anniversary and the 2017 Alumnus of the Year.  It’s an excellent opportunity for people in our communities to come together and support the work of the RLC Foundation.