INA, Ill. (Feb. 15, 2018) - Thanks to the donation and dedication of one former Rend Lake College employee, the interior of the college's Learning Resource Center (LRC) received a much-needed upgrade over holiday break. Andrea Witthoft, retired Vice President of Institutional Effectiveness, saw the need to improve the aesthetics and environment of the facility, and decided to help.

Witthoft, a resident of Anna, retired from RLC in December of 2016, just before her 18th anniversary with the college. She was no stranger to higher education in Southern Illinois, having another nine years of service at Shawnee Community College. During her time at RLC, Witthoft faithfully donated to the Foundation and designated her gifts to make improvements to the library. 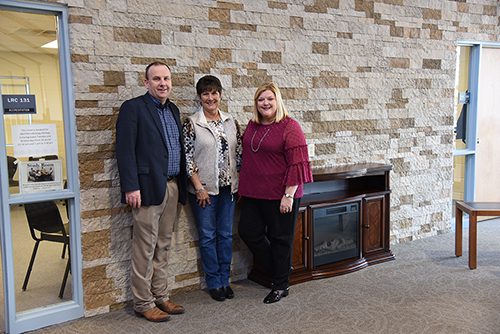 Members of the RLC Physical Plant performed the updates during the recent holiday break so as to not disrupt students. It was completely shortly before students arrived on campus to start the Spring 2018 semester.

Terry Wilkerson, RLC President, said," Rend Lake College and the RLC Foundation are very honored and humbled to have a supporter like Andrea Witthoft who sees the needs of the college and responds to them through personal donations. It’s particularly significant that she’s a retired employee who is continuing to be involved with the on-goings at RLC. She’s gone above and beyond to her commitment to the college, and she’s the perfect example of seeing a need, wanting to help, and making the solution a reality.” 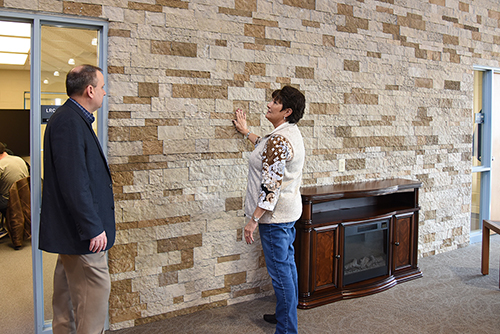 Witthoft gets up close and personal with one of the interior walls of the LRC Tuesday afternoon. Click on the image for a larger view.
(ReAnne Palmer / RLC Public Information)

The LRC provides students with countless resources such as books, periodicals, newspapers, DVDs, CDs, a Children’s Library, and a quiet place to study or work. Computers are available for students to use, as well as an online electronic library for off-campus research. Learn more about the LRC at www.rlc.edu/learning-resource-center.