INA, Ill. (Nov. 28, 2012) – Peter Johnson’s degree from Rend Lake College was the launchpad to a stellar career. Literally.
The RLC Class of 1985 graduate, and this year’s RLC Alumnus of the Year, used his education at RLC and beyond to transform himself from janitor to NASA engineer. It took hard work and a determined focus on education.
“I worked as a janitor at Bethel Elementary in Mt. Vernon,” he explained. “A social worker in Mt. Vernon, Ms. Watkins, arranged for me to be involved in the CITA program. That allowed me to work on an Associate in Applied Science at Kaskaskia College. But once I realized that degree would not lead to an engineering degree, I entered Rend Lake College.”
He graduated with his Associate in Science and didn’t waste any time pursuing education beyond RLC. Two years later he earned his bachelor’s degree in electrical engineering from Southern Illinois University at Carbondale. While at SIUC, he ran his business – a television and stereo repair outfit called Johnson Electronics – to help support his wife, Cindy, and their infant daughter.
“Juggling a family, a business, and school at the same time was definitely a challenge. From that experience, I have great respect for all returning students! Sometimes I think I am successful today because I was an older, returning student. I was ready to do what it took to get a good education.”
He credited strong examples set for him by his parents when he was growing up. His father was a chemist.
“I made a conscious decision going to Rend Lake College to pursue a degree in electrical engineering and, on my father’s advice, took a broad range of engineering courses rather than specializing in any particular field. My father ... suggested that companies would prefer someone with breadth and would provide specific, job-related training after hiring.”
His mother was also an analytic chemist. She stopped working to stay at home and raise Peter and his brothers. When the boys entered elementary school, she went back to school to be able to teach mathematics.
“I would watch her study when we came home from school and then watch her work hard grading papers once she became a teacher. I learned from them both, by example, that succeeding requires effort and that it is OK to struggle. I also found that collaboration was much better than competition. That was one gift I took from going to a community college. I see that communities work together for everyone’s benefit. That is not always the case for a large school, where the goal seems to be competitive and to be better than your classmates.” 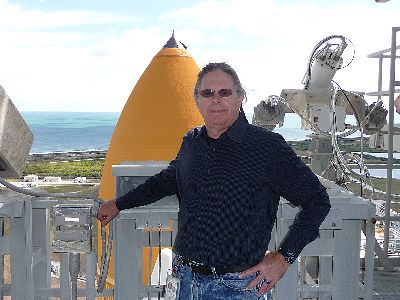 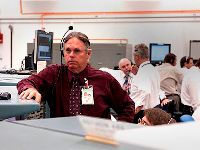 Johnson mans his station in Firing Room 2 with other members of Kennedy Space Center's Engineering Leads and Management Team during the launch count down for STS-134 Space Shuttle Endeavour.
Johnson will speak at the RLC Foundation’s 2012 Annual Dinner. This year’s theme revolves around “Inspiring Gifts.” In Johnson’s case, it is the gift of possibility – the possibility RLC provided him years ago when he was a janitor looking for more and the possibility he personifies for future students.
“Education is the key to a full and rich life,” he said. “I’ve always considered myself to live in a zen-like manner. I eat when I’m hungry, sleep when I’m tired, and take life as life presents itself. But, it is education that allows many more and better opportunities to present themselves. I certainly would not be where I am today if I had been content with my first set of experiences.”
He returned to school again, this time earning his Master’s Degree in Electrical Engineering, specializing in Digital Signal Processing, at the University of Central Florida in Orlando, in 2007.
“Rend Lake College provided me the firm foundation I needed to move on to the higher-level engineering courses I took at SIU and in my job at NASA. Whether by luck or fortune, I’ve never had to take an additional prerequisite for a class that followed any of those I took at RLC. RLC provided an exceptional footing for my educational and career path.”
His advice to students is to never stop learning and remember that it all starts with the fundamentals. He said he still reaches for those math, engineering and physics textbooks he used at RLC.
“I’ve found that I never stop learning. There will always be new tools to aid in whatever field you are involved in, whether that be arts, science, machining, sports, or engineering. Stay abreast of those tools as they will stimulate new ideas and approaches. At the same time, rely heavily on the basics of your field. There is a reason you were taught the vocabulary and foundations of a subject first. Everything grows from there.”
Peter and Cindy Johnson live in Florida. Cindy worked as a music teacher at Bethel Grade School, Opdyke-Belle Rive Grade School and Casey Junior High School when they lived in Mt. Vernon. She has continued her passion for music education – now as the Music Resource Teacher for the 86 schools in Brevard County where they live. Their oldest daughter, Katie Childs, was born in Mt. Vernon and now lives in Brooklyn with her husband Erik. Katie works for a small organic beauty company called Red Flower. Peter said she is having “some of the best experiences I have ever heard.” Their other daughter, 18-year-old Tricia, is in her first year at New College of Florida –  a small, state honors college in Sarasota. She is studying math and literary arts with a current goal of working in publishing, he said. Their son, 16-year-old Nick, is gifted in science and mathematics, along with being “a stunning musician,” Peter said. Nick plays piano, is one of 12 cellists in Florida’s 2011-12 All-State Orchestra, and has earned a spot in the Brevard County All-County Band after recently taking up percussion.
“I love music,” said Peter. “That is part of my pride in my family. Each is a gifted musician, where I am an outstanding audience member!”
He said he is still learning to play the guitar he bought in Mt. Vernon 25 years ago.
“I am finding it to be more challenging than learning any engineering equation.”
He sits on the Board for the Brevard Symphony Youth Orchestra, helping to provide the student musicians in the area with a satisfying ensemble experience. He says he’s on a “quest to remind people that quality of life involves feeding the emotions via the arts, as well as the body with food. I’m hoping to transform the focus on STEM (Science, Technology, Engineering, and Mathematics) to STEAM by adding Art back into the discussion.”
Johnson said he was honored and stunned to learn he had been selected for one of RLC’s most distinguished awards.
“I understand there were many worthy candidates and I looked at myself as less likely of receiving the recognition than the others,” he modestly stated.
“Each year, we are extremely impressed and encouraged to see the results of the education that Rend Lake College offers,” said RLCF CEO Shawna Hall. “Peter T. Johnson, our 2012 Alumnus of the Year, continues our tradition of excellence. He holds an accomplished position in a career that most people only dream of while they are watching space shuttles launch.”
Johnson will officially receive his award at the RLCF Annual Dinner, Dec. 6, at the Mt. Vernon Holiday Inn. The evening begins with cocktails at 6 p.m., followed by dinner and ceremony at 6:30 p.m. Tickets are available for $40 each by calling 618-437-5321, Ext. 1214 or 1324, or by sending an e-mail to [email protected] A table of 10 can also be reserved. 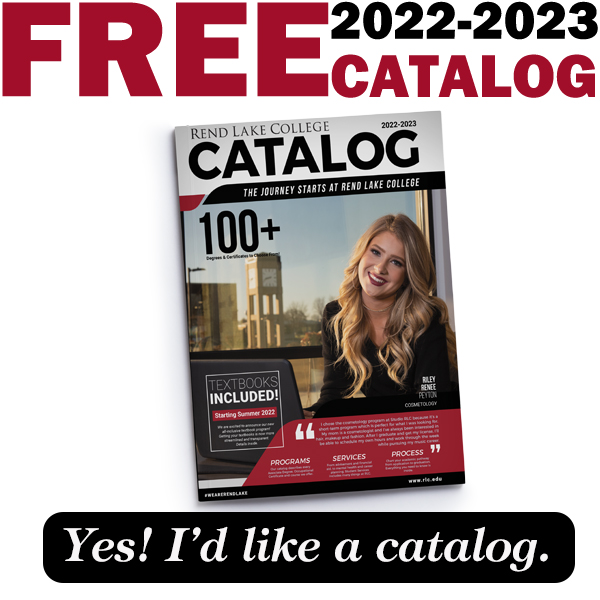